Kyanite and getting distracted 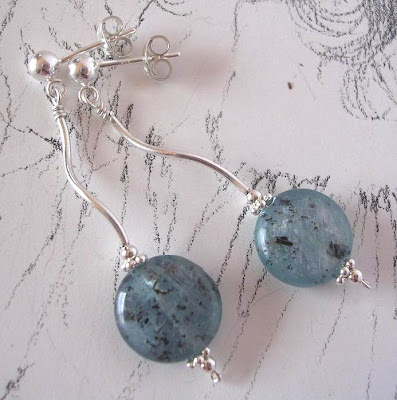 I'm having trouble concentrating. It's sad but true. Fact. Not deniable. Not even defendable. I'm just getting way too distracted.

I decided I would start a list so accordingly made one (a rather a long list too) and looking at it over 24 hours later there are still quite a few things there. Normally that's okay. But I seem to have ticked off all the inconsequential things instead of the productive things that have deadlines!!

Perhaps I'm still in recovery from our weekend away? We went to visit my dad - "grandfather" to the children and it was great to see him and for the children to see him ... living 6+ hours drive away is not very handy, after all. But all that travel really takes it out of you and I get a little unsettled away from home too.

So, that's my excuse. For now. One of the things I did do today was catch up on my blog reading (see, not exactly a NECESSARY task LOL) and found that fellow blogger & jewellery designer Hilary has had the same problem. Makes me feel MUCH better :)

Today's pic is of some simple, but nevertheless stunning kyanite and sterling silver earrings. I love the silvery blue flash of kyanite and given that it is a stone used for balancing, cutting through ignorance & confusion, increasing logical thought and many other metaphysical benefits - it's no wonder I like it!

Often a fibrous looking stone and therefore exhibiting a streaky appearance, it is challenging for a gem cutter to cut due to variable hardness and cleavage. It's hardness also varies depending on if it is tested along or across the crystal axes, so I would avoid having it in a ring or bracelet where it could take an unitentional knock. An aluminium silicate, its name comes from the Greek word for blue 'kyanos'.

In ancient times it was believed that a kyanite suspended from a human hair could follow the Earth's magnetic force like a compass needle. Cool!

Till next, when hopefully I have achieved a little more than today!!
Posted by Annette Piper at 20:59

I love those earrings!!

Oh Annette, those are so beautiful. I don't work with gemstones so I was not familiar with it. I love it, of course it's blue so I'm bound to love it.

Concentration is definitely lacking in my neck of the woods also - love the earrings, at least your creativity hasn't left you!

Between blogging, copper wire, email groups, Etsy postings and Team Esmarts at Esty, working a more than full time job, a house to clean, a husband to spoil, two cats, a dog and somewhere in there trying to find the time to make some jewelry and find some shows to sell it at, I understand your list. Hmmm, seems like my list might evolve into the subject of a blog post.
Good luck with your list!
Lois
http://www.abeadedaffair.com
http://www.abeadedaffair.etsy.com

The color is beautiful.

Love the blue in those earrings!

I've found, as a writer, that coming home from vacation puts me in a funk. To remedy the situation, I give myself a day (or two) before I do my creating...unless of course, I'm in deadline, to which I put on some smashing heels and pray to the keyboard gods to send me some words!

Annette, your earrings are fab~ I can relate to all the comments above...throw in a 14 year old and two aging parents that live next door...but we do it, and we do it well!
Best,
D
http://mygemstonebox.blogspot.com/

I just LOVE all of the GORGEOUS things you make!
Go ahead...blame it on the vacation....sounds good to me :)