A Weekend out at the Gardens 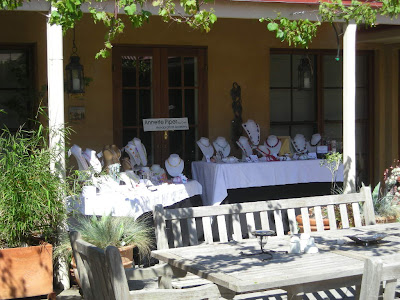 I was at the Riverlea Open Garden outside Mudgee last weekend (picture of my set up above). And what a stunning garden it was. Relatively new (the current owner expanded it about 4 years ago) she has done such a lovely job. This was my view for the weekend - not bad, eh? 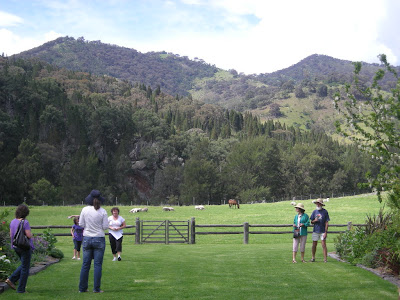 The weather on the Saturday was idyllic - warm temperatues, light breeze, bright blue skies. Perfect for browsing around gardens and even though it clouded over in the afternoon, the spits of rain held off until well after the garden viewers had gone home and we even managed to have a sociable drink and chat on the gravel drive :) .

Sunday, however, was miserable. It was cold, wet and windy. Only the most die-hard gardeners came out on a day like that (not being one of those gardeners I know I would have stayed at home!) and we shivered through the day. I don't think anyone thought the worse of any other person there when we all packed up a little early.

I did, however, meet some of the lovely people of Mudgee and surrounds and managed to catch up with a few clients who I only see rarely. One woman who mentioned that she had been meaning to get some of my jewellery for years but really had no idea what might suit her. I love that this lady actually told me this, as it CAN be difficult to know what to go for if you're unsure of colours and style, particularly if you've been a chain/pendant necklace and stud earring wearer for many years.

We ended spending about an hour trying various colours and styles on. She was surprised to see some brighter colours suited her and colours that, although she loved them to look at, really didn't do her skin any favours. She ended up with two lovely necklaces - a special amethyst one for wearing out and about and an everyday one of black onyx and white pearls for when she didn't have to think of what might go with what. She was also so thrilled she wore the amethyst one immediately and I had so many comments from other people about the "lady who had just bought a gorgeous necklace".

I had numerous other conversations with ladies about what might suit them too and they were excited to learn more about jewellery - what to wear with different necklines, what went with their face shapes, what suited their personal style and more. I do have quite a bit of this information on my site too - if you want to know more, click here to go to my Style Tips page :)

All in all (if we ignore the inclement weather on Sunday) it was such a lovely weekend. I have since run into some of the ladies I met on the weekend and they've all expressed how happy they are with their new jewels, which I love to hear!

I am off to Armidale this Saturday where I will be at The Armidale School Razzamataz fete in the TAS Emporium (situated in the Hall). I will have to leave at around 4.30am to get there in time to set up since it is just over 3 hours drive away. The fete is open from 10am to 3pm, so if you're in that area, please come and say hello.

OK, better get back to putting that nose on the grindstone - always so much to do at this time of year!

Spring, Gardens and News from the Gem World

Wow, what a week its a been! We've had gale force winds, rain, snow (albeit 'sago' snow), icy winter temperatures as well as the expected sunny skies and pleasant temperatures that spring brings. Luckily we got through the wind, rain and snow BEFORE the open garden that I attended with my jewels on Sunday. It was still rather chilly though and the garden presented beautifully, even after the inclement weather. Everyone had a fabulous time and lots of money was raised for CanAssist.

On the downside of the spring weather though, all the girls in the house have succumbed to hayfever, so we really can't get out and about and enjoy it. The Coolah valley is renowned for its ability to give people who have never had it before, hayfever, so we've really got no choice in the matter! My next show (this weekend) is at the Riverlea garden at Mudgee that is open as part of the Australian Open Garden Scheme. I know Tamara will have a beautiful garden and if you're in the district, you'll find me in the courtyard, possibly sneezing!!! The lovely Julia of Bushbelles has some information on this garden and the other Mudgee garden (Mullamuddy Park) open this weekend in her post here.

I've been catching up on my gem news and there are so many fabulous things happening in the gemmie world at the moment!

If you're near New York, did you go to the Christie's Jewel Sale yesterday? Included in the auction was a Vanderbilt diamond necklace that sold for $626,500; a Mouboussin sautoir pendant that went for $1,106,500; a 17.86ct Harry Winston diamond ring that sold for $1,818,500; and a Bulgari vivid blue diamond ring that sold for a whopping $15,762,500, which was an absolute bargain as they had hoped to go as high as $50 million! See a short video on these jewels here or click here to see the whole catalogue on the Christie's site.

Christie's is also hosting a gemstone sale in Dubai on 27 October. This twice yearly auction is apparently a highlight of the Middle East's social calendar (and rightly so!). Included in this sale is a private collection of more than 40 parures (jewellery suites), the largest selection ever to be sold at auction. Highlights of this collection include a 26ct Kashmir sapphire ring, and two Ceylon sapphires of 180ct and 130ct. Another highlight of the sale is the second largest orange melo pearl to be offered at auction (only 9 of these have ever been auctioned). The melo pearl, named after the mollusc melo amphora, is found in the waters of the South China Sea. For the Emperors, who wore the Imperial colours of yellow and orange, a Melo pearl was highly prized and its image is often found on Imperial robes with the symbol of a dragon chasing an orange or melo pearl. Another rare gem on offer in the sale is the Paraiba tourmaline. First discovered in the Paraiba State of northern Brazil in the early 1980s, it has a unique turquoise green colour not found in any other gemstone. There will be a ring and a pair of earrings made with this gorgeous electric blue stone in the sale. Click here to see a slideshow of the sale pieces.

OK, enough drooling over all the Christie's goodies!

If you like historical jewels and artifacts and are in the UK, check out the "Buried Beneath the Beaney" exhibition at the Museum of Canterbury. The archaeology exhibition showcases nearly 2,000 years of history after Canterbury Archaeological Trust conducted a major dig in, of all places, the High Street! Highlights in the exhibition include a Roman gold bracelet and a Turkish carved gemstone. Wouldn't it have been a thrill finding these.

In other news, The Bharat Diamond Bourse (BDB), touted as the world's largest diamond trading centre, opened at Bandra-Kurla complex in the Mumbai, India, yesterday (20 October).India is already a world leader in the export of cut and polished diamonds.

Tanzania has temporarily lifted the ban on exporting uncut tanzanite till next year to give their jewellery and lapidary sector time to establish themselves. I just love tanzanite - its a pretty purple-blue stone and there is a small one in the photo above (along with pink topaz and rock crystal quartz)... ok, they're not anywhere on the same page as the Christie's beauties, but hey, I've got to be realistic!

Whilst nothing at all to do with gems, I loved this post by Monique of My Cheeky Monkey on "Why doesn't an igloo melt inside?" - if you've got younger ones, check it out! And a shout out to the Business Mums Blog - a great resource if you're a small business.

OK, I must drag myself away from the computer (and the Christie's site... yes its still open!) and get to my bench.

Hope you're having a fantastic day!
Till next
Annette
Posted by Annette Piper at 10:13 5 comments: 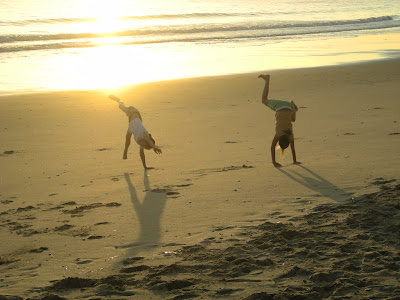 I'm home from a wonderful, relaxing holiday in Queensland *sigh*. I was full of energy first day back, yesterday I hit the post-holiday low and then today I'm feeling a bit more 'normal' LOL!

We drove north west (instead of north east) and went to visit family in Bollon (west of St. George) in Qld. They live on a magnificent property "Woolerina" where they run sheep, cattle and horses. Last time we visited it was dry and dusty no matter where you looked, this time it was green! We're farmers and graziers but their operation is at a whole new level. Typical outback living and we all enjoyed our short stay immensely. The children can't wait to return. 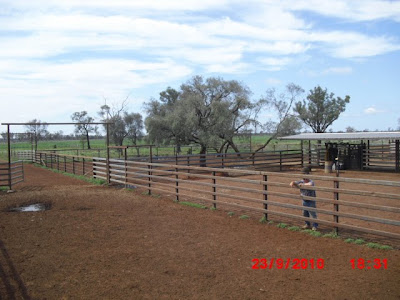 We then turned east and eventually north-east and made our way to Woodgate and the beach.

There was lots of time for all of us to read, time to play games with the kids and daily walks along the beach. I saw dolphins which was a real thrill, hubby and son saw sea turtles and the twins are cross they didn't manage to see either! 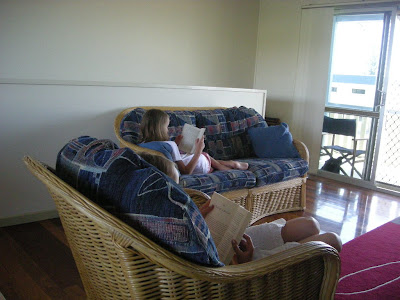 I even managed some exercise - a bit of a shock to the body I'm sure! I was up every day around 5am and off for a jog. The warmer weather (but not hot) made it easy to commit to doing this daily!

The kangaroos were often entertaining too - if you haven't heard me talk of Woodgate before it's a rare town, situated between the beach and national park and there are kangaroos everywhere - on the streets, in the yards nibbling the lawns, on the beach in the mornings. Usually they just look cute (or in the case of the big males, rather intimidating) but these pair were having a fight in between our house and the neighbours... 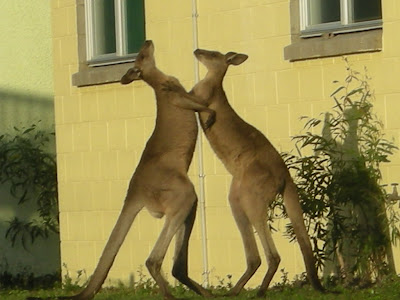 The weather was consistently warm - even on the one day it rained it was still warm (very bizarre having come essentially from winter here on the farm) and the clothing layers reduced to one light one. 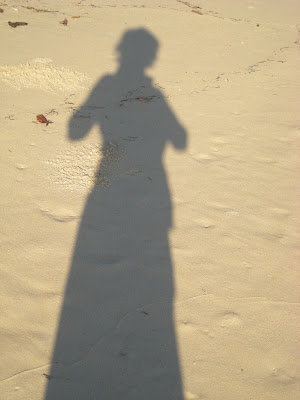 I even got to go shopping in a big town - with lots of shops yippee! - weekly. Such a rarity for me.

The weather a couple of hours drive south of us was atrocious with falls of 200mm in 24 hours. This was our destination on the return journey as my brother in law was getting married. The day of the wedding was gale force winds and rain, so the wedding moved indoors and the pool party became a normal party watching the rain sheet down!

So, I'm back in the saddle now, as they say, and have to wait patiently for another year till we can get away again.

I have a show (eek), this weekend, at the "Mayfield" open garden at Birriwa - a fundraiser for CanTeen. Lots of people say they're coming so it may be a very busy day - the gardens are supposed to be gorgeous and cover 3 acres, so it will be lovely to see!