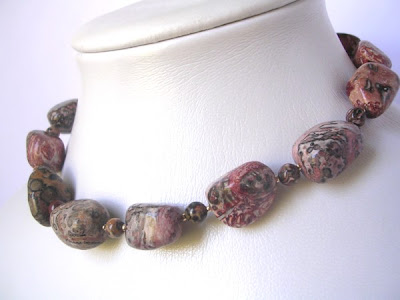 I just love jasper. With a veritable feast of varieties and the amazing patterns it is a difficult stone to resist!

Jasper is basically a chalcedony although sometimes its grainy structure means it is separated from other chalcedonies. The name Jasper comes from the Greek and means 'spotted stone'. Often containing up to 20 percent foreign materials these additions determine the appearance.

As it is relatively common, jasper was often used in ancient times and appears repeatedly in myth and lore.

Moses was apparently given jasper as one of “The Stones of Fire” which were said to possess the power to summon angels. He then had these stones mounted into a sacred breastplate for his brother, the high priest Aaron. Additionally, jasper is one of the twelve gemstones set in the foundations of the city walls of Jerusalem.

Modern day crystal healers believe it is a nurturing stone, bringing tranquility and wholeness and unifying all aspects of your life.

The stones used in the necklace I have photographed above is called in the trade "leopardskin" jasper and is a combination of "picture" and "pop" jasper (which has orbicular patterns). From a metaphysical point of view, picture jasper contains a message from the past within its pictures for those who can read it and brings comfort whilst jasper with orbicular patters helps you to accept responsibility and instills patience.

I was very attracted to these particular stones - I love their shape, colour and patterns and from a design point of view they needed little additional adornment. So that each stone can be appreciated and doesn't overwhelm, however, I spaced the larger nuggets out with smaller rounds of the same stone and added a touch of delicacy and shimmer with the addition of small 12ct gold-fill balls.
Posted by Annette Piper at 13:17