A little about Rock Crystal Quartz 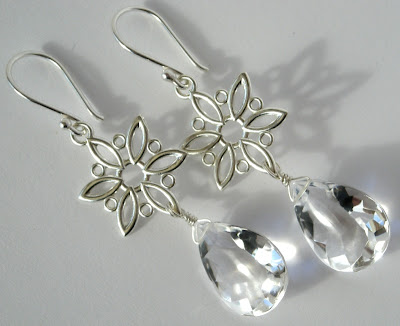 Here is a bit of information on this pretty stone - technical, historical and metaphysical:

Crystals forms when minerals in magma cools beneath the Earth's surface.  If the minerals happen to be silicon dioxide and it cools to a temperature below 573 degrees Celsius it will begin to crystallize into rock crystal.   If there are significant concentrations of other minerals within the silicon dioxide, different types of quartz will form.

Rock crystal is found worldwide and  huge crystals weighing tons have been found - although they're rarely of cuttable material.     Rock crystal can have inclusions of goethite, gold, pyrite, rutile and tourmaline.

Rock crystal can be confused with other colourless gems as well as glass imitations.  A useful test is to look for birefrigence or double refraction, which whilst low, is often still discernable in a transparent stone.   A quick way to test for it is to place the gem on a white piece of paper with a clear and straight black line drawn on it.   When looking through the top, you may be able to see a slight doubling of the line.   Note that you may have to turn the gem in different ways to test for this as it is dependent on the crystal structure not the cut.

The name crystal comes from the Greek word for ‘ice’.  Pliny the Elder believed that rock crystal was eternally frozen water ice and it certainly can look like it. Japanese myth says that quartz formed from the breath of the revered white dragon. As such, rock crystal was regarded as the perfect jewel and came to symbolize perfection or the pursuit thereof.  In first century Rome, a mystic named Apollinus of Tyana used quartz to "transport" himself. Apparently he dematerialized and materialized in the presence of Caesar Domitian and used the gem to disappear and reappear at the foot of Mt. Vesuvius!

Many cultures used rock crystal for mystical purposes.   It is found regularly in burials in passage tomb cemeteries in Europe and the Irish word for quartz grian cloch, means 'stone of the sun'.  An ancient Celtic practicewas to place nine small Quartz crystals in water, boil it, cool it, and then drink the enhanced water for nine consecutive days - apparently it would restore and maintain health.

Modern metaphysical beliefs ascribe certain benefits too -  as a powerful healing and energy amplifier.  For healing it is considered a master healer, stimulating the immune system and bringing the body into balance.  Natural rainbows are found within many quartz crystals (caused by internal fractures) and these stone draws off negativity and disperse healing energy to the body and environment.

Photo above is of a gorgeous pair of rock crystal and sterling silver earrings.  The gems are a fascinating cut - half cabachon and half highly faceted.  The result is a beautiful white flash amongst the sparkle! They'll be on my site soon :)

Thank you for taking the time to compile this most informative post.