A trip to the Sydney Opera House 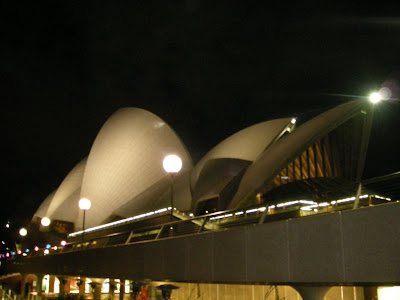 Last week just whizzed by – nothing new I know, but this time I was actually OUT rather than IN (and just distracted by everything that comes along so that I'm busy!)

The long weekend was very chilly long weekend – which the children and I spent inside the majority of the time, with books, near the fire (actually I seem to recall quite a lot of ironing getting done and not much reading for me).

Hubby had taken off to Qld for an aerobatics competition on Friday and wasn’t due back until late Monday afternoon, so son and I had to round up the cattle that were going to be picked up to go to sale and put them in the yards. Apart from one snorty bull who we managed to go around (he wasn’t supposed to be there!) the cattle were very well behaved and actually followed the fence instead of spearing off into the centre of the paddock as they often do. We got them into the right corner, up the laneway, through the holding pen and into the yards, just as hubby flew over and half an hour before the truck arrived. Son and I were rather chuffed it all went according to plan.

Tuesday morning involved heavy monitoring of the children cleaning the car (I seem to remember being able to wash and vacuum a car, why can’t they?) and getting ready for a drive to Sydney leaving lunchtime. Hubby was off checking cattle and of course arrived back earlier than expected (it’s always either early or late… never as expected) and was ready to go before anyone else in the house. Typical. But we all managed to get dressed up and ready for our outing.

Five hours later we arrive in Sydney, looking only slightly rumpled, at my sister-in-law’s house. A quick spruce up and bite to eat and we were off again to our final destination of the evening – the Sydney Opera House! (Thus the photo at the top of the post!)

As the children study classical piano with their concert-pianist-trained teacher, we decided an evening of listening to one of the world’s best pianists was in order. After huge sums of money were sent to the Sydney Symphony Orchestra, we obtained tickets to hear the renowned Lang Lang play at the Opera House. The whole experience was marvelous. We found our way to the northern foyer, listened to a talk on the music that we were going to here then found our seats in the magnificent Main Concert Hall. Hubby and I recall going there as a child but only for a tour, so this was a first for us too. This was the main concert hall (it looks like we're wayyyy up the back, but we could see everything quite clearly - close enough to see smiles on performer's faces) : 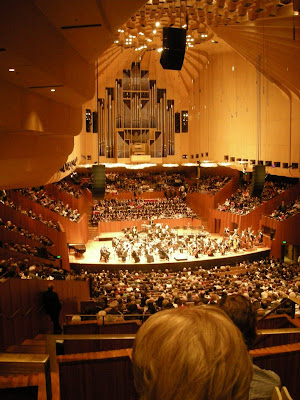 The Sydney Symphony played the first two pieces (Mendelssohn and Sibelius) and then Lang Lang came on and with a flourish began to play Tchaikovsky’s with the Orchestra. It was all wonderful! Even the children enjoyed it although one of the girls said she was too tired and just wanted to go to bed! I gave her a look that said “not on your nelly, girly” and she sat there, waking up sufficiently to enjoy it.

Unbeknown to us, it was Lang Lang’s birthday and the orchestra had organized a birthday cake after the concert – at 29 years old, this young man has the classical music world at his feet and he hammed it up on stage whilst the Sydney Symphony played and the audience sang “Happy Birthday”. One wag in the audience called out ‘speech’… and Lang Lang obliged! After an encore performance, he was presented with bouquets of flowers, one of which he pulled apart, presenting a flower to each female member of the orchestra. Lang Lang taking a bow : 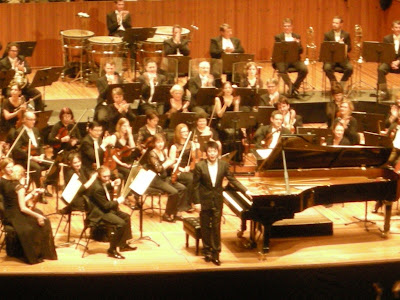 Post concert the parking station was at gridlock, so instead we went for hot chocolate and a selection of treats (huge jam biscuits and incredibly rich chocolate pots!) at the Lower Concourse which houses bars and cafes with a magnificent view of the harbour bridge. 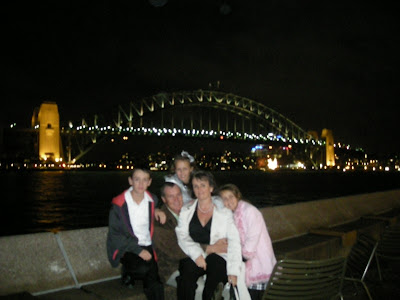 A photo opportunity or two was snapped (the above one blurry, but courtesy of the waiter in the cafe!) before wending our way back to sister-in-law’s house and a well earned rest.

More things to do in Sydney on Wednesday, including a visit to the orthodontist for the children and then the long drive home.

A day off on Thursday (well, housework and associated timewasters) and then Friday was the Zone Cross Country held in town where I worked all day for the P&C on the cappuccino stall. End result – very tired and windburned.

I finally made it to my bench this past weekend to do some orders and I'm hoping for some creative 'me' time there soon!

I've always been fascinated by the Sydney opera house. More than half a century later it's still a piece of stunning and contemporary design. I think a true patriot should visit it at least once, much like we Slovenes have a similar, albeit natural, landmark, our highest peak that every Slovene should climb at least once in his/hers lifetime.
I'm happy you had a great time, it certainly was an experience to remember. I bet the acoustic was spectacular.

I've only seen the Sydney Opera House from the outside. I would love to attend a concert there!

Glad you had a great time.

Annette,
That must have been fantastic to see Lang Lang in person, and especially there at the Sydney Opera House. Hope the kids get inspired to keep practicing!!
Cheers,
Courtney
http://www.mommyladyclub.com