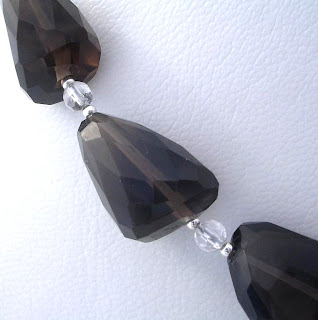 Firsty apologies for my tardiness - time has gotten away from me again!

There is something terribly attractive about smoky quartz. To think about a stone that is a brown-grey doesn't excite I admit, but some lovely fat faceted stones do tempt me!!! It is quite a difficult stone to match with other stones - I have successfully matched it with sage green pearls, with amethyst, citrine and rock crystal quartz and of course white pearls. But some combinations that you would think would work, just don't!

Smoky quartz in its darker forms is often called 'morion' or 'cairngorm'. The colour is caused by gamma rays either naturally occurring or artificial. As a quartz it has a good general hardness of 7 and as such is a fairly hardy stone. It occurs worldwide and has been found as crystals weighing up to 300kg (640lb)!

Metaphysically, smoky quartz is a grounding or anchoring stone and is a great antidote to stress. Lifting fear and depression it brings calmess and dissolves negative emotions. Such a beneficial stone, it should be worn for long periods, particularly as a pendant.