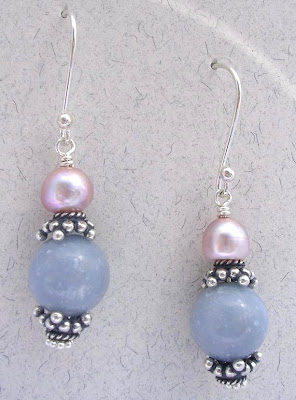 There are so many new stones on the market it is often hard to know what you are going to get! As a gemmologist who studied decades ago (eek, that makes me feel old!!) a lot of these stones just weren't around, or if they were, were relegated to the geology sphere or maybe the lapidary area.

Angelite is one of those stones. Although its been around, it has only become a more easily obtainable stone for jewellery makers in the last few years. It is more readily known as Celestite or Celestine and mineralogically is known as Anhydrite. Available under these names, it is found in colourless to blue. Angelite itself is usually blue, perhaps with some white.

One of the reasons these stones were not commercially available is because their hardness isn't well, very HARD! Angelite is no different being a hardness of 3.5 (a diamond is 10, sapphires are 9, topaz 8 and quartz 7). The hardness of a stone, when you are making jewellery, does have an impact on what you are going to do with it. You either need to put it in a protective setting where it will be supported and less likely to obtain knocks. Or, you put it on full display but limit where it will be worn. I like to take the latter route, as my jewellery really has an emphasis on the stones. So, in this case I would relegate it to earrings or a necklace. A bracelet would be asking for breakages, as would a ring. Interestingly, a lot of jewellery makers really don't take the hardness into consideration and I must wonder how many returns for breakages they get!

I obtained a lovely strand of round angelite in a huge 10mm size and they are beautiful. You can almost see how soft they are though, so I decided to make earrings, at least initially!

Blue is also an interesting colour - particularly pale blue. Really shiny silver doesn't particularly go well, so I tried oxidised Bali silver and it looks incredibly effective. I topped the angelite off with a natural lavender-toned freshwater pearl and the whole effect is very old-world. What do you think?

Angelite comes from many parts of the world including Britain, Egypt, Germany, Mexico, Peru, Poland and Libya.

Metaphysically speaking, this stone represents peace and brotherhood and as its name suggests, enhances contact with the angelic realm. It helps you to speak the truth, be compassionate and accepting and creates a feeling of peace and tranquility. It is soothing to the physical body and helps with tissue repair, blood vessels, fluid balance, weight control, sunburn, lungs and arms.
Posted by Annette Piper at 17:41

I think the contrast of the blue and silver looks great against the silver.

Hi..thanks for posting this. I ran accross the post on a search for Angelite and ws grateful you told of how soft it is. I had been thinking about making a rosary of this stone but I think I'll find another lol.

How beautiful! Our daughter's name is Angela. Much interesting info about the stone. Has this pair sold?

Yes, these earrings were made 3 years ago and went to a new home shortly after - to a lady in Quirindi if memory serves me right.