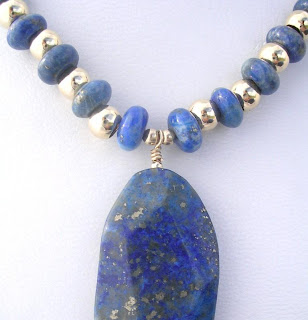 Ahhh, time marches on and I still don't post. Had a bit of a reorganise though and realised I can't have two blogs going since I don't have time to write in one! So this one won although it will be for everything now :)
All has been go, go, go here on the farm - we had rain, so things are green although it IS winter so it is a very short green. But its a good start and for us, at least, the drought is over.
I have been trying to get the spring/summer collection ready as my spring showings start in just under a month. Lots of new pieces featuring pearls, turquoise, fluorite, prehnite, rose quartz, pyrite, obsidian, garnet, coral, muscovite, tourmaline, aquamarine, malachite, lava, moss agate, and a lovely piece with lapis (see above). And of course since I can't resist it a couple of pieces in carnelian and agate/chalcedony/jasper of various types. I still have boxes of stones to make up (yes, been VERY naughty, but I just can't resist those gems!) - finding the time is the hardest part!

Now about the pictured piece.... isn't it just divine? In an earthy, goddess way of course! I have always had an attraction for lapis lazuli and this focal 'slab' has the desirable blue colour with lots of gold flecks of pyrite throughout. It really has an ancient feel so I have matched it to more lapis lazuli and lots of 12ct gold fill balls. Now don't you think an Egyptian queen would have liked it? Given the Egyptian and goddess connotations, it has been named after the ancient Egyptian personfication of the skies and heavens - "Nut".
Lapis Lazuli is actually composed of several minerals and has been used since prehistoric times for jewellery. Well known mining sites include Afghanistan, Russia, Chile, Angola, Myanmar, Canada, Pakistan and USA. The name is Arabic and Latin for "blue stone". Lapis was the source of the colour 'ultramarine' in medieval times (very expensive for paint!) and a powdered form of lapis was reportedly used by Cleopatra as an eyeshadow!
Metaphysically, Lapis has a powerful effect - stimulating enlightenment and enhancing psychic abilities, personal and spiritual power. It releases stress bring peace and serenity as well as honesty and compassion. In healing, Lapis allieviates migraines and headaches, overcomes depression and benefits the respiratory and nervous system, cleansing organs, blood and boosts the immune system. Improves hearing and assists with vertigo. For best metaphysical results it is best to be worn at the throat.

What a gorgeous necklace.