Yes, I buy jewellery too! 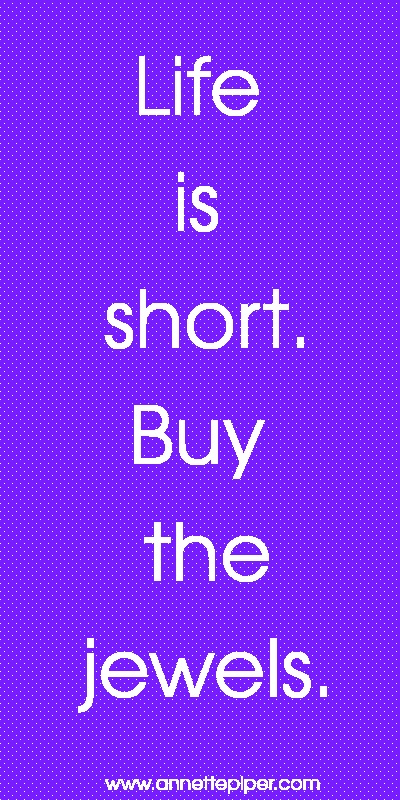 Now you may think that as someone who makes jewellery, I could have all I could possibly want and wouldn’t buy someone else’s jewellery .... well, WRONG!

Most artisans tend to specialise in a few different mediums and so when they find something that they don’t have the specialist knowledge of but greatly admire it (to the point of salivating LOL) then they can either teach themselves how to make something like it after months of practice, or they do what I do and just buy it!

Since I’ve been making jewellery I have specialised in gems and pearls.  Gems because they’re what I studied all those years ago when I did my Diploma of Gemmology.  I feel an affinity for them and my knowledge on formation and structure helps me to appreciate them even more.  I’ve always had a “thing” for pearls and as a organic gem, I love them too.

However my knowledge of metalsmithing is limited.  I often make clasps and components for necklaces and earrings, but I’ve never practiced filigree, fine piercing, stone setting and so on, as my emphasis has always been about the gems in a piece, rather than the metal that may surround them – in fact many of my pieces have only a sprinkling of silver, goldfill or carat gold.

There are many artisans out there who are far more skilled in those areas and sometimes I just can’t resist owning some of these little works of art!

I often look in jewellery store windows and I’m afraid most don’t excite me as most is production jewellery, rather than artisan made.  But when I was in Venice last year, I found a number of wonderful establishments with truly stunning jewellery.

Most of these  were near the Piazza San Marco but we found one on our side of the Grand Canal, in San Polo.   While exploring and getting lost (I read that it’s one thing you HAVE to do if you go to Venice, is to let yourself get lost and it’s not that hard to achieve!) in the little byways of San Polo, we stumbled upon it -  2 big windows literally stuffed with jewels!   They were so ”me” – multistrands of scintillating fine gems, big sparkly gemstone pendants, ropes of pearls and more.   I had to be dragged away from the shop by the children, but one daughter took some photos of the windows – and here is me , just in the photo, peering at the wonderful pieces. 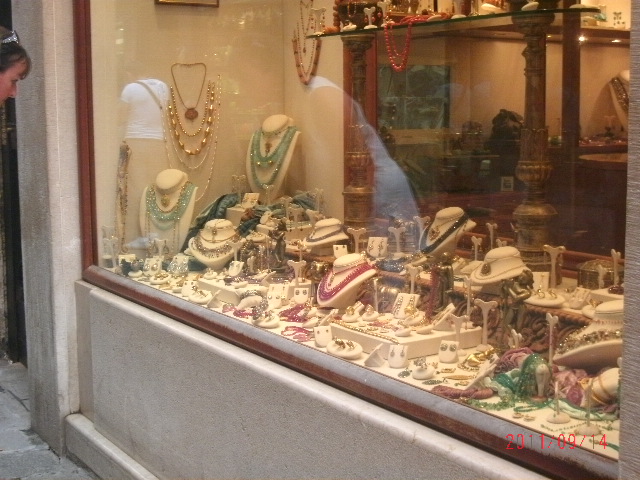 Now a large majority of these pieces I could make myself (of course affording the gems in the first place might be a slight problem in achieving this aim), but I also saw a ring.  Not flashy, but different. There was no gem,  it was the design – one that gave me the impression of columns  - and after seeing all the fabulous old buildings throughout Italy this resonated with me.  I knew I'd never have the patience to make something like it.  However I resisted going in and trying it on, or even enquiring about the price.

The next day an old schoolfriend of my husband, and his wife, had arranged to meet us for a few hours.  The wife had grown up, would you believe it, two hours drive from where we live in the central tablelands of NSW, although she looked very comfortable in her Venetian surroundings, and speaking fluent Italian.   As someone who rarely gets to a shop most of the time, I’m always up for more shopping, and so she and I wandered off window shopping. ( OK, it wasn’t  JUST “window” shopping!)   I told her about the fabulous jewellery store I had seen the day before and before I knew it, there we were!   She found a pair of earrings she loved which she bought.  I kept looking at the ring but still resisted.

That night I tossed and turned, thinking about the ring.  Could I find my way back there?  Would we have time, before we left?   In the  morning, there was no time.  With the notoriously late opening times (given they stay open so late at night), plus with packing,  I just couldn’t imagine 5 of us dragging our suitcases with their little wheels over the bumpy paths when I wasn’t 100% how to get there.   “Oh well”, I sighed, "maybe it wasn’t meant to be".

I repeatedly mentioned the ring to my husband as one of those “should have” moments.   After a few months, he asked if I knew the name of the store etc., and perhaps he could get the friend we had met who visited Venice regularly to get it for me.  Jumping on this possibility, I gave him all the information I could – my ring size, what it looked like from memory and so on.

And last week it arrived ….  It took a few months since we discussed it and over a year since I’d seen it, but I’m thrilled. 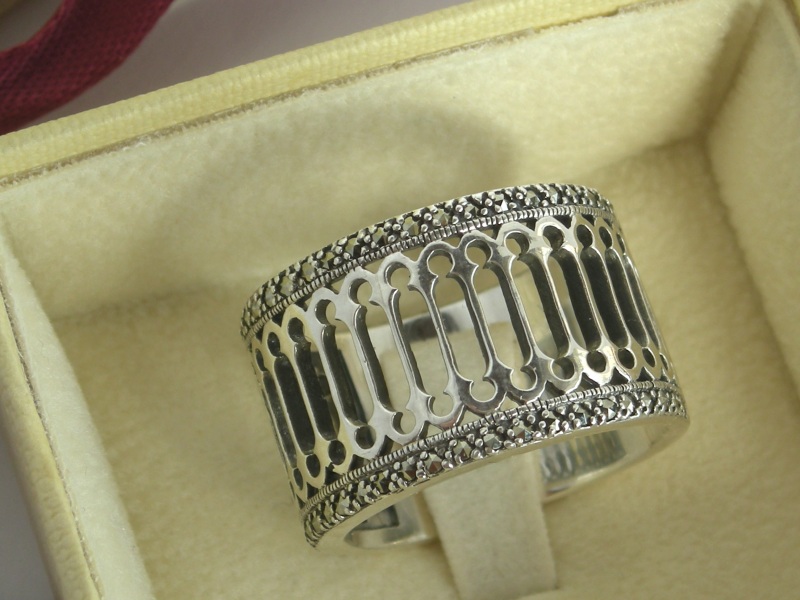 So you see, every girl needs to buy jewellery sometimes – even those of us who make it!

Oh, and if you're ever in Venice, go and see the store... Ganesha on the Ruga Rialto, San Polo.
Posted by Annette Piper at 13:59

Annette what a beautiful love story!! This was meant to be worn by you and in your family.... I love it the design is unique and I am sure you will have so much pleasure wearing it and many many compliments. The hints certainly worked on Hubby :)
Carla xx

Annette what a beautiful love story!! This was meant to be worn by you and in your family.... I love it the design is unique and I am sure you will have so much pleasure wearing it and many many compliments. The hints certainly worked on Hubby :)
Carla xx

Gorgeos ring! I'm so happy it turned out wonderfully for you. As for those momemts of "this is it" when you see something your heart just goes for it, I have learned to just follow. I've skipped on it maybe twice in my life and have regretted not purchasing a wonderful ruby red silk evening gown and a pair of perfect black pumps.:-(

Just had to pop over & say i saw Sally Stevenson at my school reunion a couple of weeks ago, we chatted about you & the connection. She is so much fun. I can't wait to catch up with her again, love Posie

A beautiful piece of jewellery and a beautiful story and this will be a piece you treasure for ever. If you have a passion for jewellery it will include all beautiful pieces and not only design that you create yourself

What a beautiful ring. So sweet of your hubby to get it for you...it was meant to be yours!

PS: I would like to invite you to enter the inHomewares giveaway at my blog. Enter for your chance to win $50 voucher! http://www.underlockandkeyblog.com/2012/11/inhomewares-giveaway.html

Amazing ring, Annette! I can see why you fell in love with it.

Oh, it's beautiful, Annette!! And I totally see what you mean about it reminding you of Italian columns. I'm so glad you were able to get it!