I survived the winter school holidays - yay!   Apart from having an event of some sort (half of them involving visitors here) the first week and a nasty dose of the flu in the second week, on the whole I found the term break more bearable than normal.

The children are obviously reaching an age when they don't need their mother to entertain them so whilst I still had numerous invitations for "playing a game", on the whole they managed to play amongst themselves or have their heads in a book, preferably sitting in some winter sun somewhere around the house.   My eldest boy, now as tall as a man (at 14!), was called upon to help his Dad more often than in the past and whilst he grumbled about being dragged out, enjoyed it once he got there and got some good 'boy' time away from us girls.

So its back to normal programming for a while.  I enjoy this time of year.  Sitting near the fire reading, soaking up some weak (instead of blazing) sunshine and starting to excute the upcoming spring collection.

The other nice point about this time of year is that its calving time.  Although the heifers (first time mothers) do have more problems, requiring checking at least 3 times a day and even then you can't solve everything, the sight of bouncing little calves definitely lightens your heart. 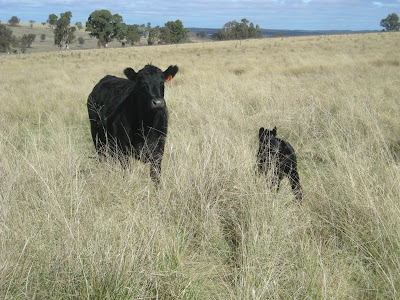 This heifer had given birth a few hours previously.  The little tyke was still a bit wobbly and the mother was skittish so I took a quick photo before leaving them alone to get know each other better.

I mentioned on facebook a couple of days ago about my baking frenzy and one of the things I had cooked was Rock Cakes.   My friends in the US, however, didn't know what these nasty sounding things were - so I thought I would show my American bloggy friends what they look like and give you the recipe in case you want to try them out!

I believe they originated in the UK, although looking at UK recipes for them they appear more bread like than cookie like.   My recipe is from my husband's aunt and she's been cooking these for over 60 years.  I think they're more like a crumbly cookie and they keep for ages in an airtight container :) 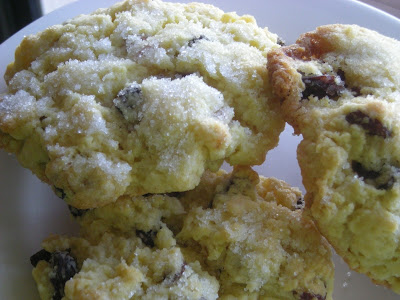 Put flour and sugar in bowl.  Melt butter (unless its nice and soft) and lightly beat eggs. Add the butter, eggs and sultanas to the flour mix and stir till well combined.  The mixture will be stiff.   Place heaped spoonfuls on a baking tray and sprinkle with a little extra sugar.  Bake in a moderate oven for about 10 minutes or till just golden on top.   If you find they spread too much a preheated tray will prevent this.

OK, time for me to put my farmer's hat back on and check the heifers - maybe they'll be some new bouncing calves since this morning :)
Posted by Annette Piper at 10:57

The Rock Cakes look delicious - I'm going to make some this week. Congrats to the momma cow, too!

They do look tasty. I'm thinking cranberries or blueberries.

Oh goodie! I'm excited to give the Australian Rock Cake recipe a try! Thanks so much for sharing it. Of course, now I'll have to "Google" what 125g of butter is in um...American tablespoons. ;o)

My Mum's favourite stand-by recipe for everything! I still have her original cookbook & it always falls open at Rock Cakes (Mrs. Knappstein). Thanks for a lovely remembering moment Annette.
Millie xx