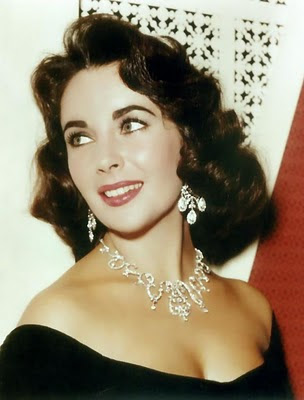 Elizabeth Taylor has passed away at the age of 79. It is the passing of an extraordinary and passionate woman who had many husbands and philanthropic interests. She happily admitted to her love of jewellery, feeling herself the custodian of some fabulous pieces and even designing a line of fine jewellery sold through Christie's. She once said, "my mother says I didn't open my eyes for eight days after I was born, but when I did, the first thing I saw was an engagement ring. I was hooked."

Here are some of the fabulous gems she owned and a little about them:

A diamond and ruby suite by Cartier, given to Elizabeth by her third husband Mike Todd for swimming laps in the pool. Mike showered Elizabeth in gifts and fine jewellery. A favourite pair of earrings with paste stones he replaced with diamonds as a surprise (photo above). Amongst his many gifts he also gave her a 29 and 7/8 carat diamond engagement ring, as to quote Elizabeth, “Mike insisted I say 29 and 7/8, because 30 would have been vulgar.” 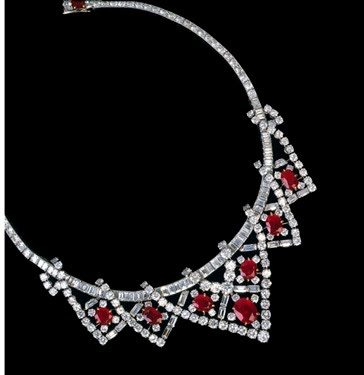 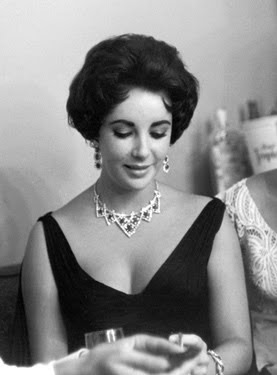 The Grand Duchess Vladimir Suite, by Bulgari was given to Elizabeth by Richard Burton. Comprised of diamonds and emeralds it contains a brooch (Richard’s engagement gift to Elizabeth), ear pendants, a necklace, and a bracelet. The suite was worn at her 1964 wedding to Richard at the Ritz-Carlton in Montréal. 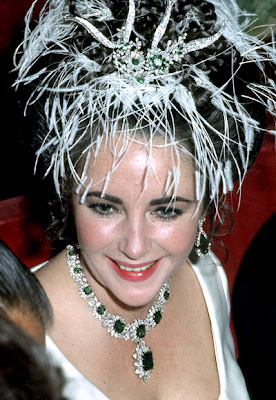 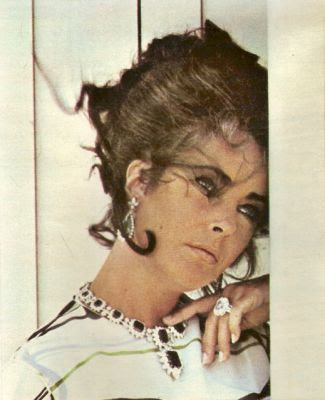 The Krupp Diamond was given to Elizabeth by Richard Burton in 1968. The Krupps were a German family that supplied munitions to the Nazis and "helped knock off millions of Jews", Taylor wrote in her book "Elizabeth Taylor: My Love Affair with Jewelry". "How perfect it would be if a nice Jewish girl like me were to own it. In truth, though, there's nothing funny about the Krupp. When I look into it, the deep Asscher cuts—which are so complete and ravishing—are like steps that lead into eternity and beyond. With its sparks of red and white and blue and purple, and on and on, really, it sort of hums with its own beatific life. To me, the Krupp says, 'I want to share my chemistry—my magic—with you.'" At 33.19-carats, it was a favourite jewel that Elizabeth wore in a ring. 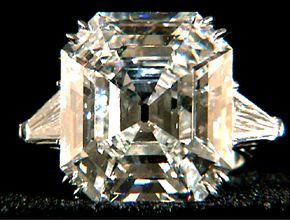 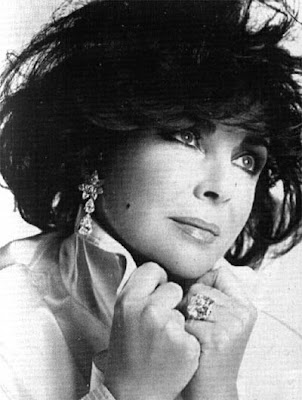 Not limiting herself to diamonds alone, another gift from Richard was the La Peregrina Pearl. Found by an African slave at Pearl Islands in the Gulf of Panama in the mid 16th Century (who was rewarded with freedom for the find), it was given to Phillip II of Spain who presented it to his English bride, Queen Mary I. After her death the pearl returned to Spain where it remained a part of the crown jewels until Joseph Bonaparte, one time king of Spain, fled the country taking the pearl with him. It passed from the Bonaparte family to the Duke of Abercorn who purchased it for his wife, Louisa Hamilton. 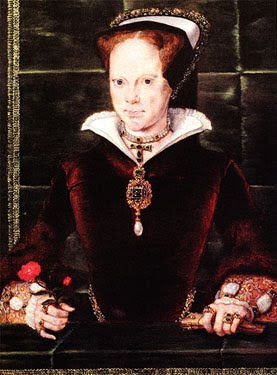 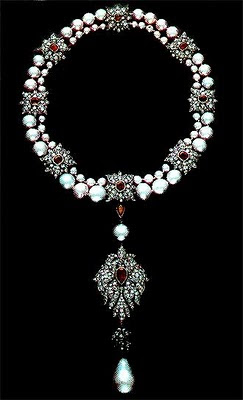 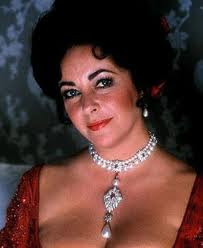 A heavy pearl, it apparently fell out of its setting twice once in a sofa in Windsor Castle and the next time during a ball at Buckingham Palace. Luckily it was recovered both times! It stayed in the Hamilton family until sold in 1969 to Richard Burton for $37,000 who gave it to Elizabeth for Valentine's Day. It continued its disappearing tricks and went missing in their Suite at Caesar's Palace in Las Vegas. After a thorough search by Elizabeth, she saw one of their puppies chewing - opening their mouth, there was the pearl, unhurt! It was later redesigned by Cartier into a necklace with more pearls, diamonds and rubies. La Peregrina remains one of the largest perfectly symmetrical pear-shaped natural pearls in the world.

Richard Burton once said, "The only word Elizabeth knows in Italian is Bulgari." He gifted her with a diamond-and-sapphire sautoir necklace featuring a 321-carat Burmese sapphire pendant in 1969. 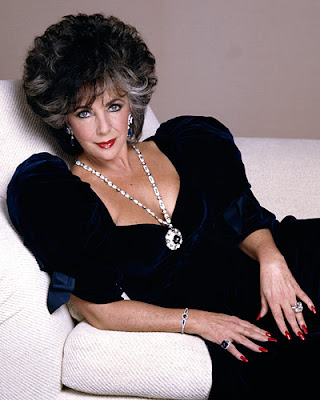 Probably the most well known gem owned by Elizabeth was the Taylor-Burton diamond. Found in 1966 in the Premier Mine, the 240.80ct rough was cut down into two stones, under TV spotlights, by a diamond cutter in the employ of Harry Winston, who had studied the stone for six months deciding on the best way to cleave the stone. The larger stone was cut into pear shape eventually weighing 69.42ct. 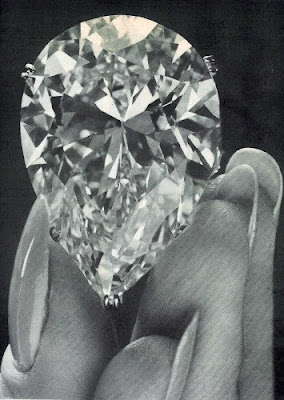 Sold initially to Mrs. Harriet Annenberg Ames, the sister of the American ambassador in London during the Richard Nixon administration. Two years later, she sent the diamond to Parke-Bernet Galleries in New York to be auctioned stating she just couldn't wear it and rather than languish it a bank vault it should be sold. After furious bidding it was bought by Cartier for $1,050,000, the highest price ever paid for a diamond at auction at the time (1969). The losing bidder was a representative of Richard Burton. The diamond was quickly named "The Cartier". 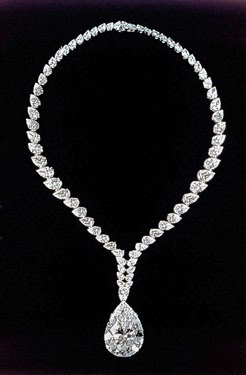 Determined to obtain it however, Richard got on the payphone in a well-known hotel in southern England, and spoke to Cartier's agent. Richard negotiated for the gem while continually dropping coins into the phone and patrons would have heard the actor exclaiming "I don't care how much it is; go and buy it." He was successful and it became the "Taylor-Burton". Elizabeth wore it for the first time in November of that year to Princess Grace of Monaco's 40th birthday celebration. 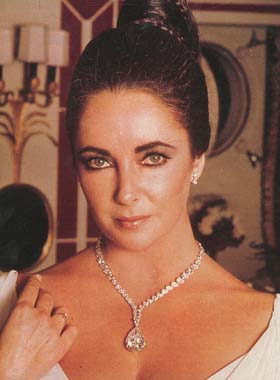 Following her divorce from Richard in 1978, Elizabeth sold the Taylor-Burton for $5,000,000, the proceeds of which went to build a hospital in Botswana. It was purchased Henry Lambert, a New York-based jeweler and is now owned by Robert Mouawad.

The Taj Mahal Diamond also given to her by Richard Burton on the occasion of her 40th birthday in 1972. A flat, heart shaped stone it has an Arabic inscription that says "Love is Everlasting". The original silk cord was replaced and it was set with rubies and diamonds in a yellow gold rope-pattern necklace. 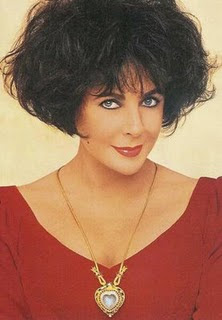 "I would have liked to buy her the Taj-Mahal," Richard remarked, "but it would cost too much to transport. This diamond has so many carats, its almost a turnip." Then he added, "Diamonds are an investment. When people no longer want to see Liz and I on the screen, then we can sell off a few baubles."

This gem was owned by Shah Jahan, who was given the diamond by his father. Jehan then gave it to the woman who was the favourite of his wives, Queen Mumtāz in 1621. 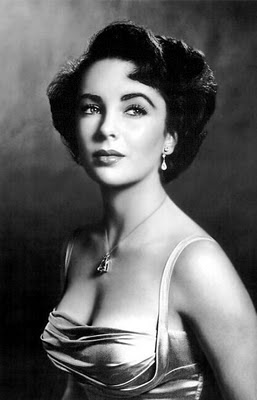 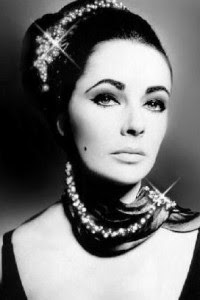 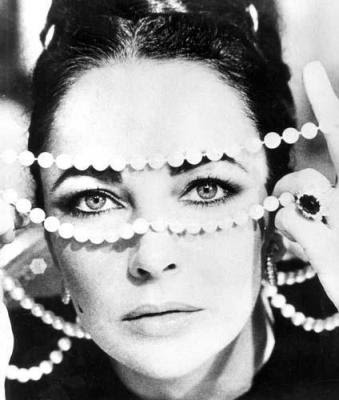 Thank you for writing and sharing this fascinating piece Annette, I enjoyed every word & image.

Vale Ms Taylor, you were a legend on the screen as in life a sparkling star in the truest sense of the word.

I've never noticed the jewelry she wore!! Thanks for sharing this, Annette. You've opened my eyes to the many things I was oblivious to, once again!!

She was such an icon. What I love is that, even with that absolutely stunning, heavy weight jewellery, she is wearing the jewels, the jewels never wear her!

Very interesting. Never heard of someone buying jewelry for swimming laps. Now I shall feel so naked when I swim my laps.

She had some great taste! That first photo of her is so beautiful! So sad to hear of her passing.

She was a great lady in every sense of the word. I love the fact that she collected and bought her own jewellery as oppose to expecting designers to send her some as is the trend these days.

you know the best part - lovely jewels that look even better on a divine woman - great post - much enjoyed :) le xox

That was fascinating, Annette! I loved hearing the story behind all of those amazing gems. I especially like the look of the necklace she's wearing at the top of your post. Yes, I could totally see me wearing that one. Mhmm!

Wow, thanks for all the great facts about her jewelry! Tess

Absolutely fascinating Annette.
You are obviously very knowledgeable about your passion!

Thanks for sharing this stuff about the jewels, i would have liked it more if u used her more signature pieces rather than obscure ones. what bout my fave one the emerald and diamond necklace and earrings. or the sapphire diamond necklace from mike todd but still loved that u featured it. thanks a bunch.

sorry about earlier post u did mention the sapphire and diamond necklace. sorry forgive please lol=D

Wonderful, wonderful, wonderful post Annette! I think ET had the perfect neck, shoulders & cleavage to carry off those scrumptious pieces so well. Plus men with fat cheque books who were absolutely smitten - half her luck!
Millie x