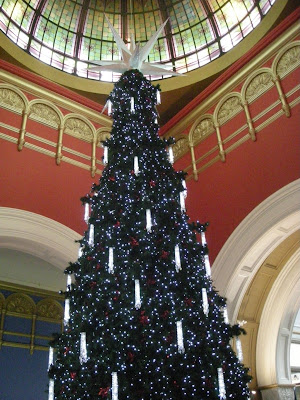 I haven't been to Sydney in ages. After living there in my late teens/early twenties, I very much agreed with Banjo Patterson's lines in the famous poem, Clancy of the Overflow :

...the foetid air and gritty of the dusty, dirty city ...

And the hurrying people daunt me, and their pallid faces haunt me
As they shoulder one another in their rush and nervous haste...

So, we usually bypass the city, concentrating just on what we have to do. We stay out of the city and avoid playing 'tourist'. I also usually go into sensory overload when we hit the city outskirts - the noise, the people, the cars, it's just too much for this country girl!

But after a quick visit there with hubby and the children earlier this week, I must say that Sydney can really turn on the magic at christmas time!

Firstly, we caught a train to St. James Station - it was just after peak hour so it was fairly quiet but we were greeted in the tunnel walkway with melodious notes from a busking flautist. We gave the children some coins each to put into his case, and he rewarded us all with a gleaming smile, a happy christmas tune and as we left his sight, a lighthearted trilling.

After helping some young mothers and their prams up the stairs at the end of the tunnel, we walked over to the famous David Jones store with its christmas windows. I remember visiting these as a child myself and wanted to share some of this with the children. This year they had marionettes singing various christmas songs in different settings. 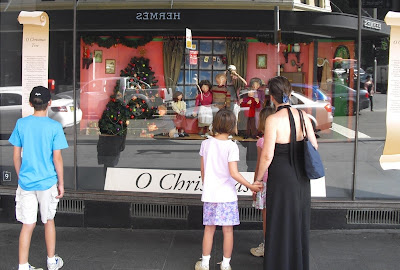 A kind young man told us that there was carol singing going on in the store at that very moment, so went into the store and listened to the last of the carols. I can honestly say there's nothing like the Sydney City David Jones anywhere else in Australia. Something that every female should experience as part of growing up :D We veered off in different directions at one stage and agreed to meet back at the piano. Yes, DJ's has a pianist employed to play for the customers all year round on a lovely little Steinway.

Next destination was a wander up Pitt Street Mall. But on our way we took a slight detour into the Swarovski Shop in the new Centrepoint complex. Wow. Crystal chandeliers, a crystal curtain and some breathtaking crystal steps! Just standing near them made you feel like a princess in a fairytale. I wish I would have thought to take a photo!

Next stop was the Strand Arcade. I recall this being re-opened when I lived in Sydney and I recalled its old world glamour so I dragged everyone in for a look. Here was a fairyland of lights and christmas cheer. Gorgeous. 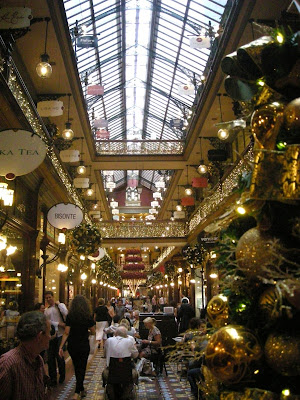 A short walk up to the Queen Victoria Building was next. I also remember this being opened (I must have lived in Sydney at a grand time!) and as we wandered up through the levels and took a ride in the old fashioned elevator, the feeling became more refined and we were rewarded with this gorgeous Christmas tree in the centre of the building, that went between floors. 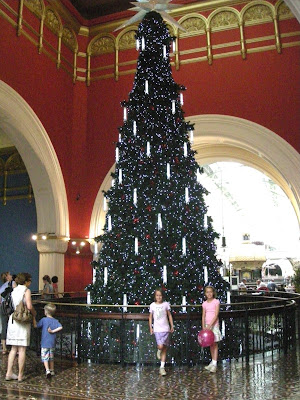 Above the tree is a magnificient stained glass dome. Mind you taking this picture made me feel quite dizzy ! 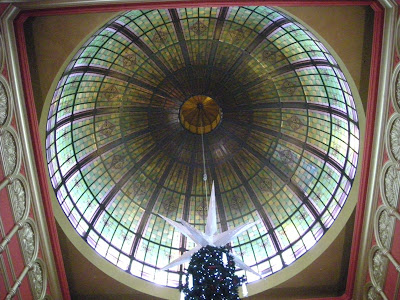 Even though we only did a small part of the city, it was such a wonderful morning. I think not having 'jobs' or shopping to do helped us to enjoy it even more and it was easy to ignore the gritty city and the hurrying people - we were just a family enjoying some of Sydney's christmas magic :)

Wishing you a sparkling festive week!
Posted by Annette Piper at 14:56

I agree Annette, there is nothing like Sydney at Christmas time. Its nice that you got to visit now and have some lovely memories. I can't wait until mine are a bit older and I can take them and do DJ's etc. Glad you have great time.

Sydney is unforgettable! So glad it brings back wonderful memories for you. Thanks for sharing those beautiful pics.

Have a blessed Sunday, Annette!

I live not far from Sydney but rarely get into the city. I spent an afternoon drifting through The Strand and QVB and Pitt St Mall a few weekends ago. No shopping, just window shopping. Was magic. The festive decorations and air of the season really added to it.

What a lovely, magical "city" experience your family was able to have, Annette! I believe you're right--having no set goals or jobs to attend to allowed you to simply enjoy being in the moment.

Sigh. I really need to focus on that this week!

Oh I wish I could visit Sydney some time in my lifetime. lol Wishing you a Merry Christmas!

Looks like Sydney has really won you back Annette! Warm wishes for a very Merry Christmas, have a truly wonderful day tomorrow.
Millie x