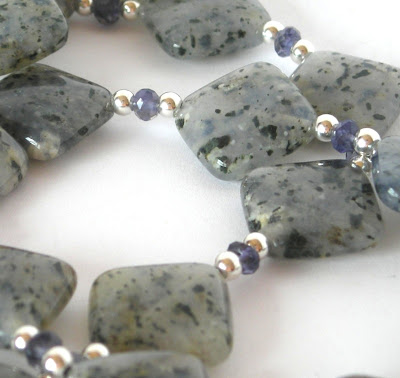 Do you know how some things happen (almost) in your backyard, but it takes a news story from another region or even country to bring it to your attention? Case in point - the Jade Buddha of Universal Peace. I had no idea that this 8 foot high 4 tonne gem quality 'polar' (nephrite) jade carved statue even existed, let alone an Australian sculptor had a hand in the design, it was blessed by the Dalai Lamai in Sydney and its eventual home be in Bendigo, Victoria!

But there you go - a newspaper article in a Canadian paper alerted me to its existence and I've now discovered more about 'polar' jade as well. I have previously heard of and had some 'BC' Jade from Canada which is a dark translucent green nephrite jade, however in the late 1990s a new find of jade was made near the Yukon border in Canada.

Inspired by its surroundings this find was called 'polar' jade. When tested it was found to be harder than normal nephrite jade and could be polished to a high shine, making it very desirable for jewellery and objects d'art. In 2000 an 18 tonne boulder of 'polar' jade was found and the noted gemmologist, Fred Ward admitted it was the largest gem quality nephrite jade boulder found to date. The planning for the statue started in 2003 and it was finished in 2008 and is valued at a whopping $5 million! The face by the way, has been painted in gold, in the tradition of buddha statues in Tibet and Nepal.

I then went on to discover that a 35 tonne jadeite (not nephrite) boulder from Myanmar was purchased by a Vietnamese businessman who plans to also have it carved into a statue of Buddha that he hopes will be approximately 16 tonnes when completed.

On the home front, it is currently wet. Very wet. I worked at the local saleyards canteen today (the school runs the canteen) and the cows and people were all soaked. Dry old drizabones that looked very stiff, had been dragged out and I'm not sure how much protection they afforded those who were wearing them as I'm pretty sure their waxed finish had well and truly gone LOL.

However we have had some lovely mild sunny days and I started to get all excited about spring and found myself working on my spring collection with lots of lovely bright colours in mother of pearl and freshwater cultured pearls. But naturally the dull weather has made me lose all interest in that. Maybe next week will be sunny again and I can take up where I left it all!

This weekend I have my last outing before spring - at the St. Luke's Fair in Scone, on Saturday from 9.30am to 2.30pm. If you're in the vicinity I'd love to see you there!

Today's pic - well I was sure I had a photo of the BC jade necklace I made once upon a time, but after almost an hour of looking I just can't find it! So, instead here's a pretty necklace - mossy quartz which has, from a distance, a slight lavender tinge is matched with silver and iolite.

I love the picture you did include - so sad you couldn't find the BC Jade - being that BC is a stones throw from where I live!! Wishing you a great day!!

Here's to you getting more sunny weather and us getting less!!

hello there :) how go the cow babies ... pieces look divine as always ... hope some quiet has returned - best le

Amazing to imagine!! Hope the weather is getting better for you Annette :)