Finding Treasure and off on Vacation 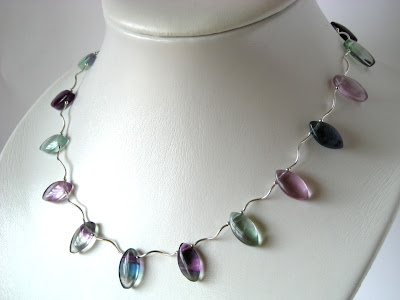 We survived the dust storms last week with nothing worse than a very thick layer of dust on everything, even inside. It cleared here about 4pm in the afternoon and you could finally see further than a few feet in front of you. The dust apparently continued east visiting Lord Howe Is and some also went visiting up to northern parts of Queensland. Just as we felt like we could breathe again, we got a second one - but this happened overnight so by the morning it was a creamy yellow and cleared mid- morning. I was still hesitant to hang out washing though in case it came back! It has been very windy but no more dust to date. Thank goodness!

Don’t you love the idea of finding a treasure trove? A few weeks ago I heard of a rare gem carving being found in an archaelogical dig in Israel. It is a highly skilled minature gemstone carving of Alexander the Great found in Tel Dor on Israel’s Mediterranean coast, which was an important international port in ancient times. A tiny 1 centimetre long and half a centimetre wide, it is believed to be carnelian, Greek in origin and was found in a building dating from 323 to 146BC.

Now for the great part – it was found by an archaeology student from Philadelphia who was working on her very first dig! She was working on the techniques she had been taught of leveling the floor with her trowel and found the gem, realizing at once that it was different in size and shape than the rocks in the ground, and when it was cleaned up - bingo, a once in a lifetime find! Apparently there are only 20-30 such carvings (probably once set into a ring) in museums around the world and is the most significant find to have come from the area in years!

So do you think you could find some treasure? I saw a great post on Cherry Mag about gem fossicking in the outback and the writer found a nice little handful of garnets!

We’re off on holidays at the end of the week – our annual getaway north to warm weather, the beach and .... eeek! ... no internet connection. I love this pic 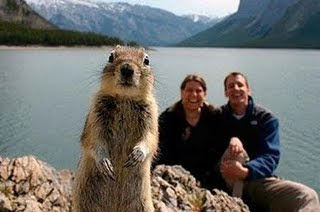 that was posted on the blog Casual Cottage – apparently this little squirrel just popped up in time to have his picture snapped by the camera (set on the timer and sitting on a rock) instead of the happy couple behind. Wonder if anything like that will happen on my holiday!?

Pic for today is suitable for some holiday glamour against lightly bronzed skin – fluorite gems cut into a marquise shape in a glorious array of colour.
Posted by Annette Piper at 08:25

Wow, how cool was that, her very first dig?! So glad you survived those dust storms and you posted another beauty on your blog that I can lust after!

Wow! You've covered so much interesting stuff in this post!

I love the simple, elegant line of the jewelry piece you've profiled. It's exquisite.

And I can't believe that pic of the couple with the squirrel! That is a once in a lifetime shot. My son is looking over my shoulder at it and we're both laughing hysterically now.

Glad to hear that the dust has settled.

So exciting to have such a fabulous find on her first dig.

I love today's post but then I love all your posts!
LOL, the squirrel is a hoot! It's like the pics I see in "Who stole your kodak moment?"
The necklace is divine!!

That is a great necklace.

And I love the squirrel pic. Great!

that necklace is gorgeous!!! i must say, your blog really makes me wish my kids were just a little bit older so they wouldn't tug on my jewelry. You remind me of how I used to love to wear necklaces - lol!!!

Enjoy your holiday! What a cute photo :-)

I love that pic! That is so funny and so very random.
So glad that you all survived the dust storms and all is well now. I LOVE the necklace in the above photo. :)

The treasuer hunt story in Cherry mag makes me want to pack up and go, too. Thanks for the link.

Glad you survived the dust storms over there, what a great first dig she may never get a better one lol! I love carved gems.
That necklace is a stunner, just elegant.
Jackie

This is a very nice piece. So light and airy feeling! Perfect for Spring!

WOW-Great blogsite!!!!!!!!! I really enjoyed the pictures- thanks for brightening my day ! Francis http://www.geothermalquestions.net

We had awful dust up in Mackay as well, it was just awful, I thought it would never go.

I just love that squirrel! so cute! and to pop up at just the right moment, how great is that?

And the necklace, as usual, is beautiful!

those flourite stones are amazing! most of the time when I find flourite it's rather dull - but these sparkle and glow

Alot of gems in this post- both literally and metaphorically...enjoy your holiday!
X

Glad you didn't have any damage from the dust storm...
Beautiful necklace, as always!

Gosh the dust storms sounded like a nightmare. Glad you were all ok.

I know she was so excited to find that on her first dig. I would be over the moon! I had seen the little squirrel picture and that it was so funny. Oh and the necklace is just beautiful!!! Hope you have a great vacation!

That is a gorgeous necklace!

as they say...all is well that ends well..

Hi Annette.
What a wonderful find and a great story. Our weather here hasn't been that great either.
Take care