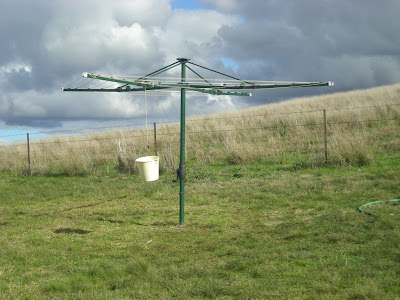 As promised in response to some comments recently, here is my clothes line. Just an ordinary clothesline - although I do believe it folds up - not that it ever has! The bucket is for my pegs - it's tied on, so has to be tipped out when it rains and fills up with water. We are mid-winter here, so no snow, just cold weather some grim looking clouds. Sometimes there are cows over the back fence, but not today.

It appears from comments I received, that having no clothesline is a bit of an American phenomenon. It seems that many people aren't happy with the way clotheslines (full of clothes) look. We Aussies tend to tuck clotheslines out in the back yard, or in higher density areas they might be a retractable set up. So they're not really that obvious in the big picture.

More and more people are thinking 'green' and energy conservation, so the use of a clothes line makes good economic and environmental sense, providing its not raining or snowing outside. I believe this is a driving factor behind the "Right to Dry" groups in the US.

I personally do not and never have owned a dryer. If it's wet for an extended period and I really need what's still dripping on the line, then I get it off, respin it and hang it around the house for a day or so! The wind is pretty strong here since we're situated right atop the Great Dividing Range, so delicates tend to be hung on a rack in the laundry all year round, otherwise they'd either get damaged from the excessive flapping or end up down the paddock where they might get eaten by a cow!

A few of my friends do own a dryer, but they tell me they rarely use them - only on those occasions when they've forgotten to wash something they need for the next day (and its already 10pm) or if something is not quite dry after a day on the line in winter. In my case, I just have to find something else to wear!

When I lived in Sydney (too many years ago to admit) in an apartment, there was a laundry on each floor with a washing machine and dryer that was coin operated. Although they still did have a clothesline tucked away in a corner of the grounds :)

I'm finding this topic rather fascinating, so do let me know what you think about clothes lines, if you have one, if you've ever had one, or even if you want one!

Getting on to other things, I admit to being in a quandary about the lack of good artisan markets anywhere close by.

A few months ago I found that Canberra has Handmade - a quarterly market for artisans, designers and artists to show their wares. I was thrilled to see this - its the closest one yet! Perth is blessed a similar market and Sydney has the established Paddington Markets for new, hip, indie and handmade.

Yesterday while cruising around my blog list, I saw that Margarent of Konstant Kaos is attending her first Sisters Market and she also linked to Made n Thornbury - both handmade markets. How wonderful!

Now I know I live in the middle of nowhere (or everywhere?) so I've been looking at the major nearby towns with reasonable populations. There are plenty of galleries, but they only want 'art' and then at the other end of the spectrum there are general markets that have either imported goods or craft. It seems to be a case of And never the twain shall meet.

I appear to be falling through a gap in the market place. I have a great clientele and many admirers of my work, but I still have to get it out there and be seen to attract new clients.

So, what to do? I can see a need for something in say Mudgee - it's a good size town with wineries that attract a lot tourists all year round. But they very much have the gallery/market divide. As the town isn't that huge I wouldn't see a need for something frequently - but even a Christmas Designer Market would be fantastic. There are some very talented artisans in the district that surely could benefit! Am I the only one that sees this gap, and if so, do I REALLY want to be an events co-ordinator!?

OK, enough with the deep & meaningfuls! Think I'll look for a pretty picture instead to brighten my mood.... 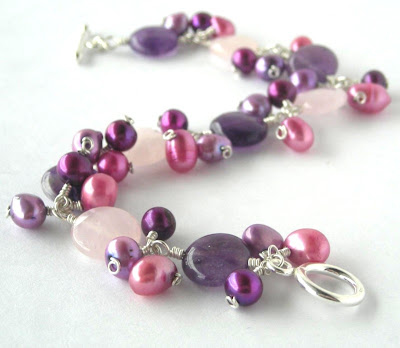 Ahhh much better :D Till next week!

Ooops, almost forgot to add - I've got 100 followers - YIPPEE! Thank you to Natalee of Raising Normal Kids for being number 100 :)
Posted by Annette Piper at 13:31

Hey Annette,
Of course you do. There is a gap there for sure. If I can help with advice I am happy to! Go get them.

Thanks for dropping by and mentioning Handmade, I have you on the list and have not forgotten you. promise!
Cheers
Julie

The Aussie backyard would be bare the without the old Hills Hoist, lol. How many of us swung around on one of those as a child. I certainly did - it was great fun :)

Looking at your backyard makes me want to travel and visit places I've never been! Until I went to Europe with my husband about 7 years ago, I couldn't "appreciate" other landscapes and the way other people lived because I was never out of the US. In the town I live in, you don't get much property. The homes are built very close to one another...I thnk this another reason for not having one. It makes for an interesting post!

Hi Annette! To answer your question I have the stuff to hang a line outside to dry things from the house to the garage. I have lines in the basement too. I use them for my rugs. I use my dryer. I live right in the city. Well not a big city a tourist city though. The way my yard is everyone in the whole neighborhood would see my laundry. So I don't hand dry. I probably should start as it would save money.

As for the markets can't some of you get together to start one? What about asking local stores if they can sell your stuff? I know in this tourist town Some of the stores do that here. By the way that bracelet is absolutely gorgeous!!

I love the bracelet especially the colours. They are so well coordinated.
Most Malaysians place their clothes line at their porches which is kinda unsightly.

Yay!! thanks for the shout out..natalee

We used to have a clothesline just like that growing up! As a matter of fact just a few years ago when we visited my parents my stepfather put the boys baby swing on it and pushed them aroun in it like the swings at the fair! It was good fun!

Annette no one has a clothes line where I live in NJ...crazy huh?? I really want one..youve inspired me

I have a fold-up type as we live in the burbs on a half block, but I'm hanging out for a good old hills hoist at our next place. I remember growing up with one, can't imagine life without a clothesline, haha!

Handmade - thanks for that info I never knew - some place else to shop. The clothesline - oh nothing like them with washing out drying in the sun. Lovely jewellery too Annette - youare so very talented - the colours are amazing.

Hi Annette,
I remember clotheslines when I visited my grandmother as a child; but you hardly see them anymore even though they are "green". Your style of clothesline would be appealing to people here since it doesn't take up too much space.

As for markets; check for locally owned jewelry stores that sell finely crafted handmade jewelry on consignment. We have a popular shop like that in my town. You could also have a "trunk show" at your house or a friend's house and have refreshments. Have you checked out Zibbet.com yet?

BTW, I just noticed your reply on my blog back in March. I did not moderate comments back then so I missed some replies. I just googled Norman Lindsay and really love his cat artwork; so cute!Thanks for telling me about him.

Your jewelry is just lovely in every way; great colors and designs!

I would so love to start using a clothing line... you've definitely inspired me.

Beautiful photo, btw... makes me want to put on something feminine and have tea with friends!

so much talent - your clothesline must look color coordinated, too...

we have something like that back in india too..

thanks for warm welcome to commenting club

Hey Annette,
I love your bracelet. I also love my clothes line. When we had our backyard landscaped one of the things I insited on was that our clothes line was staying! I do have a dryer but only use it in 'emergencies'. When it comes to clothes lines, nothing dries better than the old 'hills hoist'!

I agree that we don't have much in our area in the way of markets for 'artisans'. I know Forbes has started having a Grow it, Make it, Bake it market every couple of months but I haven't visited so don't know what its like. I think one in Mudgee would be a grand idea!
Cheers
Sharyn

I would love to not own a dryer. We're not allowed to hang our clothes in our division!

I live in the UK and washing lines are a very common feature of gardens here. Not that they're used that much due to our famously wet weather!

I have a clothes line strung across my patio for sheets and large towels, and also a rotary clothes line at the edge of the lawn for smaller items.

I'd love to have the lines tucked away out of sight, but my garden is really tiny, so I just don't have that luxury.

Many people also have driers as a back up during inclement weather, but I don't have room for one in my present kitchen. I have had one in the past, but it shrunk so many items of favourite clothing I stopped using it.

I actually like the sight of freshly laundered clothes fluttering in the breeze!