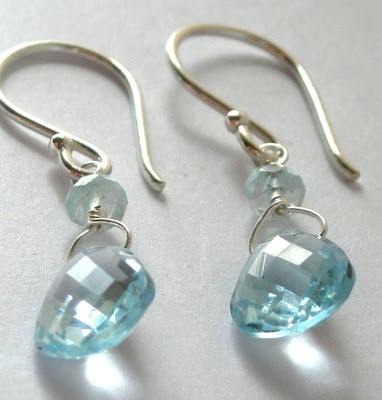 All across the gem news this week was the sale of the 7.03ct rectangular cut internally flawless vivid blue diamond over the past week? Extracted last year from the Cullinan mine in South Africa it went under the hammer in a Sotheby's auction held in Geneva to an undisclosed telephone bidder. The price hit a new high (per carat) for any gemstone sold at auction, eventually selling after some harried bidding at 10.5 million Swiss francs ... that's almost $9.5million USD or $12.2million AUD! Wowsers!!! Apparently the new owner gets to name it for prosterity as well. (Well, you'd like to get some sort of kudos for paying that much for a stone - albeit one of the world's rarest gemstones).

This led me to read about other blue diamond sales. I found that London jeweller, Laurence Graff, paid just under $5 million for an oval vivid blue diamond of 3.7ct in mid 2008. He followed this up at the end of 2008 by buying the 35.56 carat Wittelsbach diamond for $24.5 million! The really interesting thing is that he outbid the Bavarian government!!

Well, back to reality and even though I have a sizeable stash here, no blue diamonds I'm afraid, not even a little one *sigh*. The closest I have would be blue topaz - so above is a picture of some blue topaz and aquamarine earrings. They're still pretty, even if they're not diamonds!

Onto other things.... I wanted to tell you about two jewellery artisans that have really taken my attention lately. Andrew of Chainmaille by MBOI makes some amazing chainmaille pieces and he photographs them so beautifully as well!

The other is Jenny of J. Mack Gems, who I recently met through Creative Bloggers. She has made some outstanding beadwoven pieces - check out this piece call Gladiator - isn't it extraordinary! I just love it!!

I know Mother's Day is past, however slow little person that I am, found this great gift that would be appropriate for any work at home mum from the Business Mums Network.

Now I have been very remiss in not putting up the recent blogger buddy award I was honoured to receive from Jenjen at Gotta Love Mom. I love sitting down with a cuppa and catching up with what she has been up to (and admiring her wonderful pics), so really appreciate her giving this award to me! 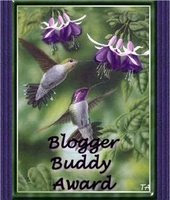 Hi Annette - huge thanks for your comment on mine and for the welcome to the mommy bloggers....
Wow, those earrings are just beautiful....I am one HUGELY fussy jewellery person yet would snaffle those in an instant...Now off to have a wander round the rest of your blog - have a feeling I might be some time (and shall have to sit on my hands to make sure I don't reach for the credit card!!!)
Janex

Well, it doesn't matter if these earrings aren't diamonds, they are still gorgeous!

Wow,it is mind-blowing how much money these gems are going for!

Thanks Annette for the lovely comment on our work, my lovely wife is responsible for all the photographs as well as some of the jewelry.

Those earrings are ...,I'm out of words. Every creation of yours is a stunner!!

ooh, I want those! They are SO beautiful!

OH they're just beautiful and my favorite color on top of it!! Can't say I'd turn down the blue diamond either!! LOL

Congrats on the award. It's a pretty one, just like your jewls!!

Goergeous earrings! And WOW that Gladiator piece is amazing. I can see it on red carpet with a strapless dress. :-)

I want those earrings!

I didn't even know there was such a thing as a blue diamond! The blue topaz looks beautiful too!

Hi Annette; what gorgeous blue topaz earrings! Thank you so much for your nice words this morning; it really made my day!

These are so pretty Annette, truly! What is the point of woning gems you cannot wear because you would be scared stiff you would either lose them or someone would cut your ear off to get them. I think your work is outstanding!!

Thank you for the mention Annette! Really enjoyed my week in the spotlight over at Creative Bloggers =)