Caveat emptor (and on a lighter note, Mother's Day) 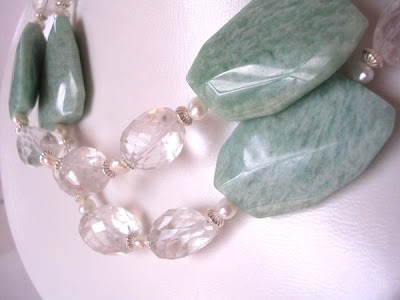 Can you believe Mother's Day is this coming weekend? Yes, it has crept up on me too! My children are taking full advantage of it and are making things left, right and centre... and all for me. They are also planning to give me breakfast in bed which will certainly be a change since I am the one that usually waits on them! But that's one of the best things about Mother's Day - having your children make you feel special! I was looking at the Small Business Diva's blog where she made mention of the origins of Mother's Day, which apparently date back to the 17th century. Mother's Day as we know was established in 1908 - so its a century of tradition already.

On a completely different note I must express my concern at the amount of misinformation about gemstone identification - particularly as used in jewellery. I recently purchased some "spectrolite" from one of my suppliers. Their spelling is often incorrect, but they usually label their gems correctly. Now spectrolite is another term for labradorite and whilst the stone I received was similar in colouring, it definitely wasn't labradorite. Around the same time someone sent me a stone which they identified as glaucophane. Interestingly the so-called "spectrolite" was the same stone. Then I purchased a stone called larvikite from another supplier and lo and behold this was the same stone AGAIN. So I have three stones, all the same, that are supposedly larvikite, glaucophane and spectrolite, depending on where you get it from! This is a typical example of the misinformation that abounds with a large number of resellers in the marketplace. These resellers believe what they are told, or make assumptions on limited knowledge and this false information goes along down the chain and the the end result is a person buying jewellery that is incorrectly identified. This is an old gripe of mine, and one I can't help feeling strongly about as a gemmologist! With regard to the glaucophane/spectrolite/larvikite debate - well I am still researching but early results indicate that they are all larvikite. And a very pretty stone too! So a word for the wise, if you are buying from someone you don't know is honest, or you don't know their knowledge level / qualifications, then "Caveat emptor" (buyer beware)!

Well, enough complaining! Now onto a new piece that I made just before Ironfest....this is a big, bold, opulent and yes, even decadent, necklace that is really long and really enormous! I can't actually put the whole picture up here so here is a detail shot of the gorgeous amazonite, the sparkling rock crystal, the glowing freshwater pearls and the shining silver that go into making this necklace very special!
Posted by Annette Piper at 15:11