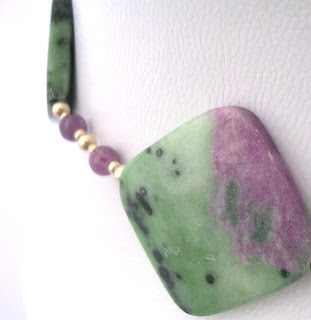 Whilst my love affair with fluorite continues (see last post), I purchased some lovely anyolite, also known more colloquially as Ruby Zoisite. So, lets look at this rather pretty stone (pictured above as part of a new necklace with plum coloured ruby ;) see http://annettepiper.vstore.ca/product_info.php/products_id/387 for the full necklace ).
Zoisite is a mineral and was named after a collector by the name of Zois. It was first found in Austria in the early 1800s and was originally called saualpite. The gemstones of the zoisite family are the stunning purple-violet-blue tanzanite, the opaque deep pink thulite and anyolite, the medium to dark green stone with ruby.
Anyolite, as I've just said is green 'rock' it has black inclusions of hornblende and opaque ruby which can be quite large in size. Its name is from the native language of the Masai for 'green' and was first found in Tanzania in 1954.
The stone is ornamental and its opaque appearance and a rather brittle nature means it is usually cut into smooth shapes, which it wears well and which shows up its contrasting colours to the best effect.
I have recently become interested in the metaphysical uses of stones. Gemstones have, after all, been used for millenia as talismans and to assist in healing, as well as having some pretty amazing stories connected to them. I also get asked on occasion by clients as to what a stone can 'mean'. So here's a bit on the metaphysical side of Ruby Zoisite/ Anyolite.
According to The Crystal Bible by Judy Hall, anyolite activates the crown chakra (consiousness) allowing access to soul memory and spiritual learning. It also amplifies the biogmanetic field around the body. So....any problems with maintaining that 'higher state of consciousness' or feeling a little lacking in the aura department, anyolite, or ruby zoisite is for you!
Posted by Annette Piper at 11:36

They are beautiful! Shame you live so far in Australia! I want it! ;-)