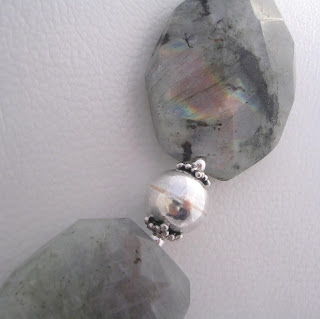 Ahhh, a busy day of jewellery making! Very satisfying :) And writing here two days in a row. Unheard of!!

I wanted to share this gorgeous faceted labradorite that I recently obtained. Full pic can be seen HERE. Although to initial appearances it is quite a steely grey, each and every piece has a beautiful flash of orange/yellow/green as it moves or is turned and just makes it irresitable. You can just see a faint flash in the above picture - it is much brighter in real life. It can be quite a difficult stone to match with other gemstones and I found with these large faceted flat nuggets silver went the best! What do you think?
Labradorite is named after the location it was found in Canada (Labrador), although it is also found (among others) in Australia, Madagascar, Mexico, Russia and the United States. It is a plagioclase feldspar (there are MASSES of feldspars out there!) and the lovely flash I noted in the above pieces, is specifically called labradorescence which comes in bright, rather metallic tints, mostly in the blue-green range. This schiller/colour play/flash is caused by the light bouncing off the internal structure of the stone (I could get all technical on you, but I'll refrain LOL).
It also comes in quite a dark background colour as well as colourless and with a brownish tint. The darker stones are often cut en cabachon to display the labradorescence the best. It is a relatively hard stone with a hardness of around 6 to 6.5.
Have you ever heard of Spectrolite? Well it is really labradorite from Finland that displays a particularly effective labradorescence.
OK, now to the metaphysical side of things....this stone does ALOT. No wonder I like it! :) To summarise....
Labradorite is considered a highly mystical stone. "A bringer of light" it protects the aura and raises the consciousness. It stimulates intuition and psychic gifts including a sense of knowing what is right. It calms overactive minds and energises the imagination, it banishes fears and insecurities and strengthens trust in both yourself and the universe. It works well on dispelling illusions and is a useful companion through change imparting strength and perseverence. For healing it treats problems with the eyes, brain, stress, metabolism, colds, gout, rheumatism, hormones and blood pressure. To use - wear over the higher heart chakra (upper chest).
Well... there you go... you learn something new everyday!