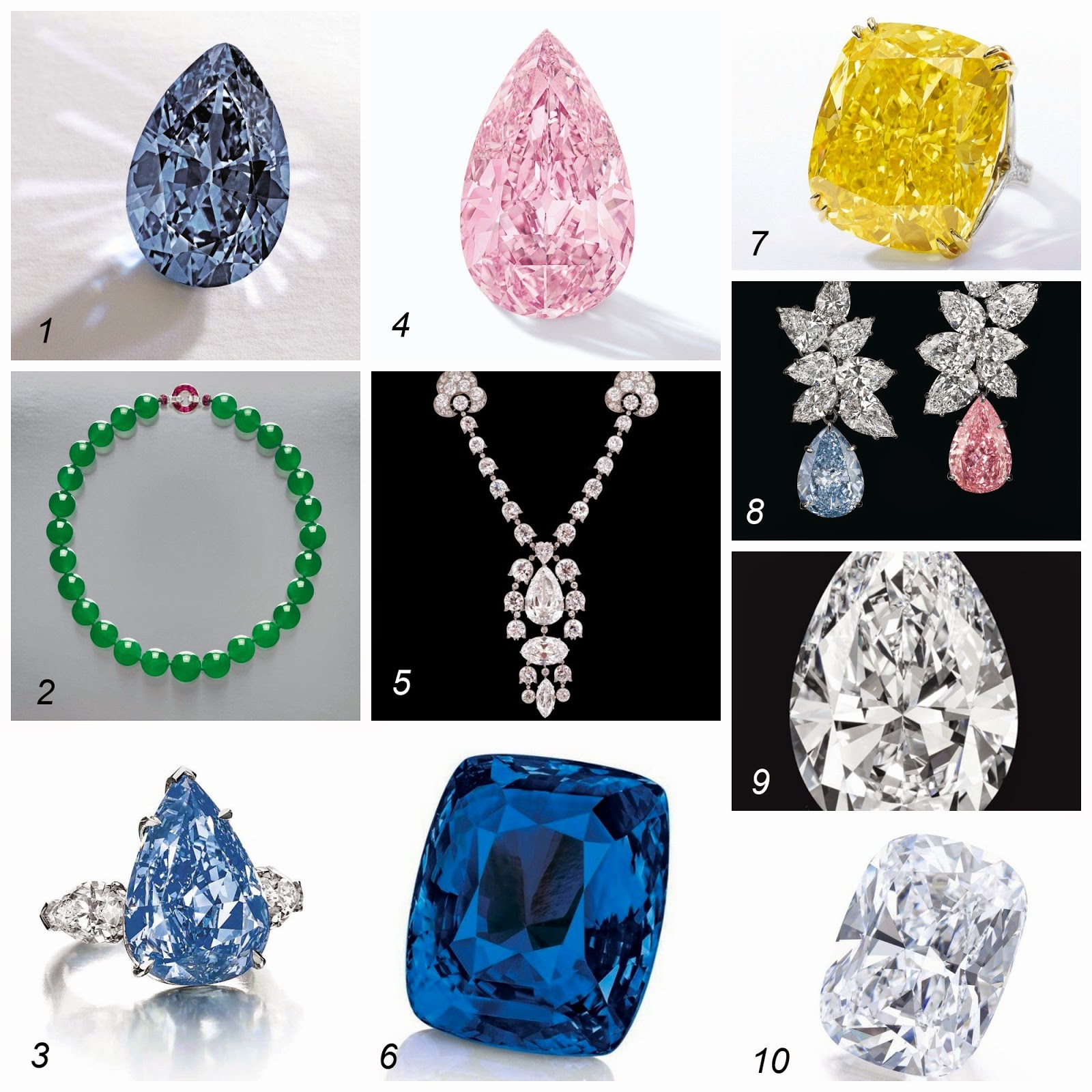 It was a great year for jewellery auctions and records toppled.    The top 10 most expensive jewels are photographed above.... here are their details...

Sold at Sotheby's New York on 21 November 2014 for the princely sum of $32,645,000 this 9.75carat fancy vivid blue diamond was from the collection of Mrs. Paul Mellon.   This record breaking diamond set a new auction record worldwide for any blue diamond and a new record for any diamond per carat ($3,348,205).

The Hutton-Mdivani Necklace composed of 27 bright green graduated jadeite beads with a Cartier ruby and diamond clasp was formerly owned by Barbara Hutton, Louise Van Allen and the Princess Nina Mdivani. It was purchased by the Cartier Collection on 7 April at Sotheby's Hong Kong for $27,441,026.   This necklace set a new world auction record for any jadeite jewellery and a new world auction record for a piece of Cartier jewellery.

The largest flawless fancy vivid blue diamond in the world (13.22 carats)  was purchased on 15 May by Harry Winston at Christie’s Geneva sale for $23,795,372.  For approximately six months it held the world auction price for any blue diamond.

6. The Blue Belle of Asia
The fourth largest faceted sapphire in history is placed at number 6.  The Ceylon sapphire weighs an amazing 392.52 carats and was sold by Christies of Geneva for $17,295,796 on 11 November, setting a new world auction record for any sapphire.

Yellow isn't everyone's favourite colour, but this fancy vivid yellow diamond of 100.09 carats sold at Sotheby's Geneva in May for $16,347,848, setting a new world auction record for any yellow diamond.

I love this mismatched pair of vivid blue and vivid pink diamond earrings.   Purchased by Laurence Graff for $15,820,731 on 11 November from Christie's Geneva.


Which is your favourite?
Till next :)
Annette