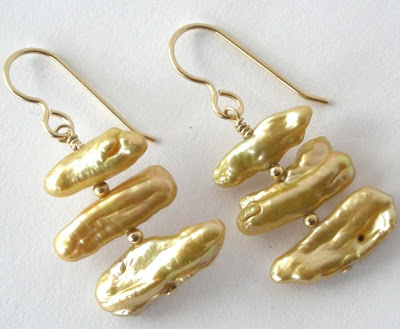 Another week has flown by and school holidays are coming to a close. I waved my hubby and son off at "O-dark-hundred" this morning as they took off for Perth and the Red Bull Air Races. They left 13 hours ago and in another hour they will have crossed the continent and arrived in Perth - which I find mind blowing in a small, two seater aircraft! They have phoned me at every stop - Broken Hill, Ceduna, Forest and Kalgoorlie. They will be gone for about 5 days so it's all girls in the house which the younger two are thrilled about. It also means that my guise as Farmer Piper has reappeared - I'm almost getting used to it!!!

In an effort to have some time with the girls yet still be productive, I let them loose on my bench today and let them create a piece each which I then made.

I am constantly surprised at what they come up with - their sense of colour is superb and they keep that while thinking outside the square. I watched with amazement as they went through boxes of stones looking, collecting and discarding. The results were combinations of 1) black lava, golden topaz and grass green peridot with a sprinkling of gold and 2) red bamboo coral, Peruvian amazonite and silver. They also chose the clasps and length and stood at my shoulder making sure everything was just 'right'. I remain impressed!

I'm a member and ambassador of the wonderful Australian group Connect2Mums. We had our inaugural conference last year and what a fun time we had - the ultimate in social networking! There was much laughter and lots of dancing at a nearby nightclub after hours that had fantastic duelling pianos. The 2010 conference is coming up at the end of July - Monique has blogged about it and put up a photo of the C2M leaders from last year's event which I've copied here 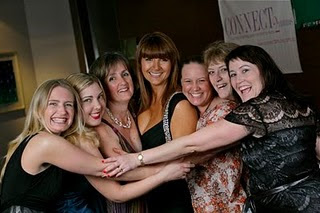 I'm third from the left - it's rare that anyone gets to photograph me but at least I'm all dressed up here ;)

If you want a dose of colour inspiration, check out Julie's site where she features lots of scrapbooking layouts. The colour combinations are just fantastic :)

Today's picture is of some golden-wheat coloured freshwater pearls in a funky stick shape. Eye catching and different, yet light and easy to wear.

I owned a art school for children and adults for several year, and my favorite thing was to teach the kids classes.

It's amazing to watch them create, they are so free, they choose what they love regardless if it goes together, and enjoy the process of putting things together.

Watching your girls create must have been a really fun process, and it sounds like everyone got some fun new jewelry too.

My daughter once created a pair of earrings for me out of pink, purple and yellow braided embroidery floss! She was about 8 years old and totally surprised me. Anyway, I enjoy your posts and creations. The only problem is narrowing a choice down for purchase!

Oooh, I'd love to be let loose with your collection of stones, I wouldn't actually create anything.....design is NOT my forte, your girls sound like they're one up on me there.....but I would ooh and ahh and touch and drool and dream....

My son once created a bracelet for me out of blue beads with the help of his pre-school teacher for Monday's Day.

You looked great in the pic.

Have a wonderful weekend.

A girls week sounds great. I love watching children create. My mother made things with my sister and I growing up and we both still LOVE to create.

Hope you are having a wonderful week.

I have family in Ceduna - Auntie Joy would have put the kettle on ...

maybe we should do wife swap for a week so I can have some girlie time :) still I must say I do beads and jewellry creation with the wee lads ... but today it was all mini bike on the spare lot with dad .... hugs le

Thanks for the mention Annette! I'm a little late in getting into the action, but I'm very excited to meet everyone in our group. I'm heading to Mexico to celebrate 40th birthdays with 2 close friends, so I'll be out of town for a few days,but I'll try to get my post for this week all ready to go up while I'm gone.

Don't worry about being in a different time zone! Still stop by when you get a chance & join in Ann's Virtual Girls Night Out. She usually has her post up about 10am our time (Pacific Time-Los Angeles) and a lot of us who join in even still sign up & get and give comments on Saturday or Sunday, no hurry! We'd love to have you!

I hope you enjoy your girl time! My daughter would LOVE to hang out designing jewelry with you, too bad I can't send her over for an afternoon! :(

Have a great week!

Oh how neat that the girls were able to create some jewelry! How fun! I hope the guys have fun and you don't have too much work to do while they are gone.
We are rounding out the last couple of months of the school year and will be starting our summer vacation soon. I can't wait to take a small vacation with my family! :)

Love the photo of you-so pretty!

Oh, I hope you're having a wonderful girly time with your daughters! When my hubby was out of town and my two kids were younger, I could get away with doing some er...girly stuff with them both. But as my son got older he'd get very suspicious. "This isn't another movie where everyone is SINGING again, is it mom?" Ha, ha!

I'd love to see the pics of their final creations.

Looks like you all had lots of fun. Love these delicate, pretty earrings.

I love teaching kids new crafts or techniques. It is amazing to watch how detailed they can get. One class of gem tree students was a group of girl scouts. They were so inspirational in their attention to every little detail on the tree and wanting it to look just right.

I LOVE these earrings Annette!! They are just beautiful, I am about the mention them in a post for Mothers Day gift ideas :-)

Watching children create things is so much fun. My daughter is taking art classes now and I love to see her artwork.
I'm a new member of the comment club.

This looks like a mighty awesome group to be part of Annette & yes, girls just like to have fun! Lovely pic of you, Miss Gorgeous.
Millie ^_^