Farmer Piper signing off (I hope!) 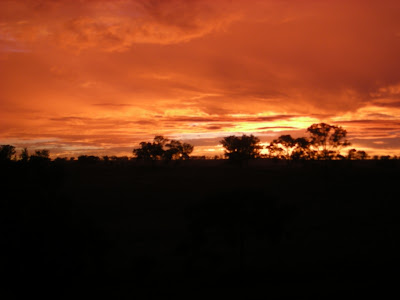 We've had rain today - a lovely drop, just steady without being too heavy - the type that soaks in the ground straight away. I was woken early by orange glow at dawn - the sky was stunning! It obligingly stayed that way while I found the camera. It did change quickly though. I took some pics to share with you (more below). Within half an hour of taking these the rain started.

It's been a long couple of weeks and I'll certainly be glad to hand back the farming duties to the man of the house! Whilst it can be visually gorgeous and liberating not having a neighbour within coo-ee, living out here on the land, it's often just a lot of hard work.

I was looking back through some notes I'd written to friends over the last couple of weeks about my farming duties and thought they summed it up pretty well...

Played farmer and spent hours moving mobs of cattle yesterday. One mob just didn't want to budge and went to the opposite corner of the gate.... like what the???? And my hay fever was NOT happy when I was riding through paddocks of lucerne in full flower! Sent many 'not-happy' vibes to absent husband at that stage. 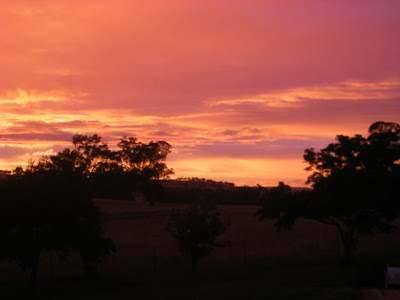 Dear Bulls (yes you big bone heads), please don't rub against the tap in your paddock for a scratching post and turn the tap on, letting out a whole tank of water.

Dear trough, please don't get stuck 'on' because your water level dropped so low (blame the bulls, see above) and run 12 hours of pumped water down the hill.

Dear heifers, please don't rub against your trough because its dry (see the bulls - they had plenty) and move the float cover so that it gets stuck on when water is finally back on, pumping out MORE water all over the ground. (Well at least it was in a different paddock). 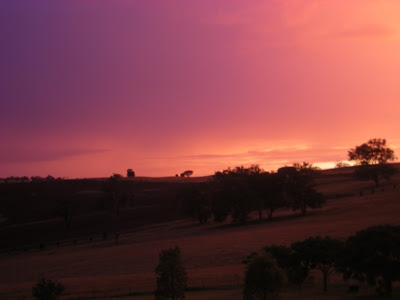 I met my match this morning. The bulls. There are numerous bulls in a paddock. FIL moved the heifers into the paddock next to them when he was up here making sure all my water problems were sorted out. Then he comes back and tells me that "you may need to move those bulls into the paddock below where they are, as the heifers may be too tempting - they'll get in, probably breaking the fence doing it". Ah,thanks! So this morning I dutifully go down and there are three bulls hanging along next to the fence with 50 odd heifers right on the other side.

Think of three adolescent boys flexing their muscles and a class of tweens (who think wearing very short skirts is way cool) a few feet away avidly watching the boys.

So I move the older bulls (think men who really don't have time for silly little girls) as they'd break the fence in an instant if they wanted to get through. Mind you, one of them got very fiesty and started snorting and pawing the ground. Imagine a bull of around 1000kg doing this in front of me on a quad with a dog quivering on the back behind me. Hmmmm. Exactly. Anyway I get those three moved without TOO much terror on my part.

But the younger bulls. No way Jose, they're not going ANYWHERE. And you can FEEL the eyes of the heifers going "oooh, don't shoo them away.... they're CUTE". So after numerous attempts to get them away from them, I've left them there. Maybe they'll be tired of them and won't all be hanging along the fence tomorrow (yeah, right!). Ruddy heifers are going to be in for a shock if the bulls jump the fence!!! 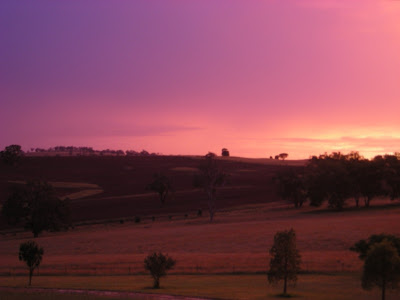 No major problems today - well, the tank was overflowing and the pump was still on. So a little problem I guess. I couldn't understand why it was on when I had set the timer, so off I set to check it out. I had a close look - it has two coloured pins, red and blue. I had set the blue to 3pm and the red to 8pm so that it would pump for 5 hours. One would THINK that RED means STOP. Uh no. Apparently not. I experimented and turned the timer around and the RED is for GO and the BLUE is for STOP. Go figure. Must have been designed by a man....

The bulls have finally been moved - and I have to admit it was FIL who managed to get the dog to work for him and move them away from the silly girls on the other side of the fence. Who, I may add are still there, vainly hoping the boys will come back and they can flirt some more.... 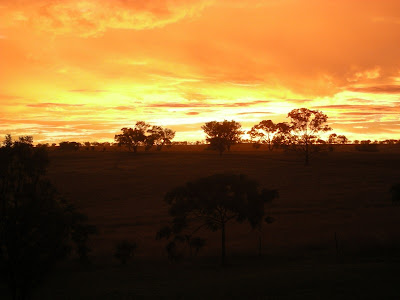 So that sums up my fortnight as Farmer Piper pretty well. Hubby is finally back in the country although not quite home yet. Hopefully tomorrow if the rain clears up (as he can't fly through the weather).

I'll be back next week, when I'm assuming my life will have returned to some sort of normality!

PS I had one question to answer from last week's post - 'What is a saleyard canteen?'. The saleyards are the local yards where cattle are sold every fortnight. The school's parents & citizens group runs the canteen there selling refreshments (tea, coffee, cake, sandwiches) for the duration of the sale.
Posted by Annette Piper at 21:54

What absolutely gorgeous sunsets! The sky is just radiating warmth. I think it must be mandatory to have a few sundowners and take a moment to just be still and watch...

Hope you have a lovely weekend!

Annette I'm exhausted after reading this post! Gosh you need to clone yourself x5 ways. I hope you make your husband read your recent posts, I think he'd be speechless with admiration!
Millie ^_^

Oh, I'd be signing off too! All that water!Beautiful sunset though.

Beautiful photos. What a mammoth time you have had with hubby away. Hope the weather is good enough to fly in today

What a gorgeous sky ... and I'm sure you're appreciating the rain!
Well done to you ... Farmer Annette! I'm sure you'll be glad to be handing over the reins to hubbie.
xx

Those pictures are stunning! I guess I didn't realize you lived on a full blown farm, or with all those animals, I guess it's more of a ranch? Whatever, better you than me...I'm scared to get close to cows.

Howdy, Farmer Piper! Love the sunsets. I never think to catch any. I'll have to see what our sunsets look like in our little back yard.

The photos are beautiful Annette! :)

Okay, that was HILARIOUS! I'm sorry, I know it probably wasn't as hilarious from your end, but it made for some great reading. You are an awesome wife, please tell your hubby I said so!

Your description of the cute heifers in short skirts flirting with the muscle-flexing young bulls cracked me up! Ha, ha, ha!

And as a side note--that was seriously THE MOST AMAZING sky I have ever seen. Do you get colors like that very often?!

omg woman, you are so game to be facing those bulls when their hormones are kicking in. good on you for moving the/fil helping.

lucky heffers didn't have to experience randy bulls. photos are amazing shots. bet there is some grass there now.

hun, your clock needs turning back an hour - just thought i would let you know. the movers day jewellery is stunning - i thought some of the stones were freshwater pearls.

have a great week - assuming the kids are on holidays.