What the stars wore to the People's Choice Awards 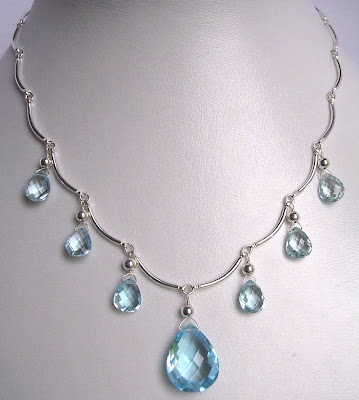 A new calendar year means the Awards season has started again and lots of opportunity to see the gals in the spotlight glammed up - to check out their fashion and their jewels!

This week was the People's Choice Awards held in Los Angeles.

Jewellery was pretty low key overall. Some chose beaded embellishments on their gowns instead of a necklace - in fact necklaces were noticeably absent. Two necklaces that did jump out though were 1) Demi Lovato with a large, draped, diamond and gold detailed piece that almost looked like a lace cut out from a distance and 2) Sofia Vergara whose large gold and silvery-grey pebble style necklace certainly grabbed the eye.

Earrings of course were abundant as they have been for a few years. Big, long or chandelier style, mostly in white gold/platinum and lots of sparkly diamonds. Of note, Taylor Swift wore long drop snowflakes, Mary J. Blige showed off white and brown diamond long geometric drops, and hostess Queen Latifah wore a pair of rose cut diamond silver and gold earrings and then after a costume change appeared in round diamond and platinum drop earrings which were a blingy 20 carats each!

Bracelets were mostly cuffs or bangles. Gold was more noticeable in this department but diamonds were more in evidence - from simple diamond bracelets to diamond mesh cuffs. Multiple bracelets were also worn by some - Mariah Carey and Jessica Alba happily layered them. There were also a few big cocktail rings - Taraji P Henson's gemstone ring was huge!

Oh, and the men looked just fine too ;)

Today's pic - well, just because the stars didn't wear a necklace last night doesn't mean I wouldn't! Perhaps I'd wear something like this since I just love sky blue topaz.

20 carats each? Holy smokes, how the heck does her lobes not droop to her knees with those? Craziness.

Such a gorgeous piece pictured. I just love it.

That necklace is divine! So elegant and classy!

Ditto Lori, DIVINE! Totally right for a gala such as that.

I've never cared for one shoulder gowns. In fact I hate them. Don't know why. I don't like everything to be symmetrical but in a gown, I guess I do.

Wow this necklace is wonderful for a sweet evening party or dinner.I would wear a light blue dress in matching with it. What do you think...

Nice necklace to give some one special on a special day.It's gorgeous too.