Diamonds falling from the sky, freecycle and a timeless black necklace. 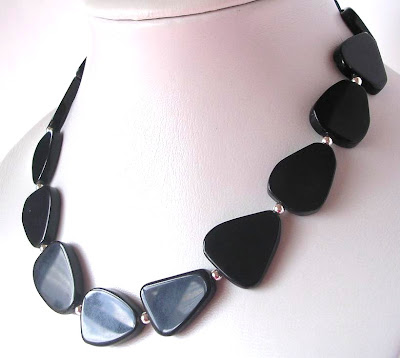 Yay! Some progress made in the last few days with all those orders and remodelling jobs and I feel quite liberated from my to-do list now! I still have plenty to do of course - I'm starting to get a hankering to create some new things and I really want to re-do my website.

I belong to a huge number of groups and forums some of which I have mentioned before. The wonderful thing is with such a diverse group of places is that you can sometimes find out things that you never would have found for years! One such place for me is a rockhounds group and through there I found the following article "Diamonds Rained Down During Ice Age". The article details claims made by Allen West, a retired geophysicist, that after a 3-mile-wide comet hit eastern Canada about 13,000 years ago, rocks (including diamonds and some precious metals) were blown out of the Candadian earth and rained down over the eastern United States. It's only a theory of course, but wow, what an explosion that would have been. And it's certainly being a nice neighbour sharing your wealth in that way LOL!

On the idea of sharing - have you heard of Freecycle? I had kind of heard of this before but found details on it on the Busy Mommy Product Review site. Freecycle is a grassroots movement of people who are giving (& getting) stuff for free in their own towns. It's all about reuse and in this day and age of high pollution, the perils of greenhouse effects and a shortage of natural resources, it's a worthy idea. I did a quick search and found there are 151 freecycle groups in Australia and one is in a neighbouring town! Certainly something to investigate.

A picture of a simply stunning and classical necklace today - the black stones are agate – thick cut slabs in rather soft geometric shapes that have the most wonderful dark gleam. These are enhanced ever so slightly by balls of argentinium sterling silver (tarnish resistant) for some added shine and sparkle. Finished with a gorgeous sterling silver clasp that you may want to wear it on the side as a feature rather than hiding it to the back! These stones sit so beautifully around your neck and feel cool, heavy and smooth. I can see this necklace being worn with a charcoal suit and crisp white shirt for work, or a linen day dress in white or neutrals or even a little black dress at night. Basically it speaks about refinement and pizzaz.

Meanwhile, down here on the farm..... lol. Ah well, if I couldn't live vicariously through my clients, then it wouldn't be nearly as much fun!

Beautiful necklace Annette. And as I live on the eastern seaboard, I should go diamond hunting in my yard!

Nice post. I'm a big fan of the Freecycle plan. I find it much easier to get rid of things when I can give them on Freecycle. And of course I've gotten some wonderful things as well. I've also been bummed by the stuff that got away (like those hundreds of cigar boxes from yesterday, grrrrrrrrr)

The necklace is beautiful!
And I love me some freecycle. It is the best!

Annette, your jewelry is stunning...I know I always say this to you in my comments but you are truly talented!!! I wish you weren't so far away...is it really expensive to ship from Australia??!! I should tell my husband to check your blog out around Christmas time, esp when he asks me "what do you want for Christmas?"

I love Freecycle!! It's such a great way to get rid of stuff we don't need and to know that it's going to someone who could really use it.

Another Freecycle fan here. The concept is brilliant and the people you meet are so grateful and nice. It couldn't be easier to get rid of excess "stuff".

Your jewelry is beautiful!