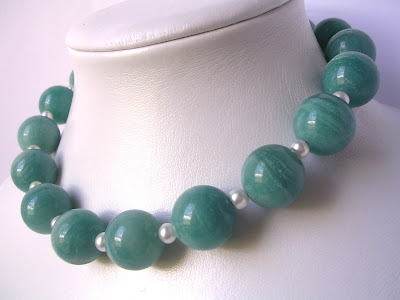 Ahhh, shopping, don't you LOVE it. The highs of finding something new, hearing that little angel on your shoulder going "goodie goodie" and then the expectaction of waiting for the items to arrive (since I only ever seem to shop online, the whole shopping experience is somewhat extended!). Then when the goodies DO arrive, the anticipation has built and you rip open the box to see the treasure inside! Ahhhh, bliss.

OK, well, maybe I'm a shopaholic? But I KNOW there are many of you out there that are the same. Nod your head .... that's right ;)

So, what have YOU been shopping for? I've been shopping for stones and pearls - I told you I needed more last week! I've revisited some of my favourite suppliers and even found a new one that I am sure will keep me salivating for years.

Someone sent me an email the other day saying there was only 51 days left to Christmas! EEEK. Its even less than that now! I really will have to think about gifts soon. I've just had to have a look at my favourite gift store, Tonic Gifts, and found the Action Hero's Handbook - now I know my son would love it as he has always aspired to be Indiana Jones and I can see my hubby sneaking the odd peek too ;) Michelle from Tonic Gifts also has a great article on her blog about christmas shopping which is well worth a look before we plunge headlong into the fray!

The pic for today is a necklace of huge amazonite balls (they really are big!) separated by white freshwater pearls. The toggle closure, although you can't see it in the pic, is also made of amazonite - how cool is that! I call this my "Wilma" necklace - as in the Flintstones ;) . The amazonite is a beautiful aqua blue colour and really quite magnificent, especially in such a size! Meaning "from the Amazon", this sodium feldspar has been used for ornamentation for thousands of years, with articles of amazonite being found in treasure hoards from ancient Egypt. Metaphysically it is considered a soothing stone, calming thoughts and the nervous system and protecting against electromagnetic pollution.
Posted by Annette Piper at 09:55

And don't forget the book on Being An Action Heroine so you can keep up with both of them. :-)