A great show and a summery jade necklace 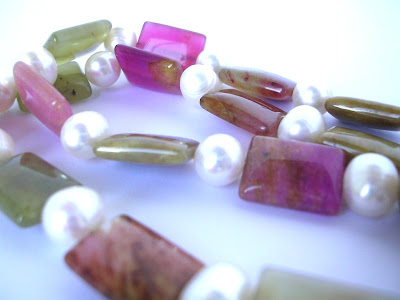 Well, the Merriwa Show has been and gone and what a great time was had by all! You may or may not have heard but there has been an outbreak of Equine Influenza in Australia and all horse movements have been banned to limit its spread. This of course has had a huge impact on regional and local agricultural shows where horses still play a big part in the program. The number of attendees were reportedly down, but the organisers had a great idea of doing the events withOUT the horses. For Merriwa, this meant, for example, replacing the horses with quad bikes in the calf-roping competition and the barrel race! Apparently it was great entertainment and perhaps it will become a fixed part of the show scene - after all a lot of farmers (around here at least) use bikes instead of horses (us included!).

I didn't actually get to see any of this - only had it reported to me. Why? Well, I was exhibiting in the 'ladies' pavillion along with the cooking, craft, horticultural, art and flower displays, and all the lovely people coming through kept me exceedingly busy! I usually try to take an assistant to an event as it just gets a tad busy trying to talk, to process transactions, to wrap and give general assistance to people trying on necklaces, etc.. I DID take my husband, but he decided he was no help at all and disappeared for most of the day!!! I told him that I could use some help wrapping and he said to my (luckily very friendly customer), "Madam, would you like to wear that?" lol. Ah well. At least he was invaluable during packing up!

All in all its been a particularly popular time for my jewellery - the warmer weather perhaps, or have I just been recognised? I even note that in my very favourite shopping blog My New Shiny Shoes that one of my bracelets was listed a couple of weeks ago :) See it here. I have found so many wonderful bits and bobs to buy from this blog that I am sure I would never have found by myself!

I also sold the bracelet featured in my last post! Inevitable really, it was soooo pretty. And it has gone to a lovely young lady who I know will look after it and cherish it.

I have included a pic for today's post - its just such a summery, pretty piece! It is a necklace of Soo-Chow jade (treated) and lovely big fat white freshwater pearls. Its so simple, but the colours of the jade are vibrant and the flattering glow of the pearls onto your face is an added bonus ;)

Jade is a tough stone with a hardness of 6.5-7. Although encompassing two distinct minerals - jadeite and nephrite- they are better known and treasured as simply 'jade'. Translucent to opaque it is cut en cabachon to highlight its beauty. These days a lot of jade is treated to some amazing colours, which obviously don't occur naturally, but make for beautiful jewellery! Jade has been used throughout history - in early times for weapons, and in China for over 2000 years for carved figures and symbols used in religious and mystic rites. Valued more than gold in pre-Columbian Central America and its name derives from piedra de ijada which was a reference to its metaphysical properties of healing and protecting the kidneys. The particular stones seen above, are from the Soo-Chow area in China.
Posted by Annette Piper at 09:40

I love this jade piece. The colours are gorgeous!