Pearls - all you ever needed to know! 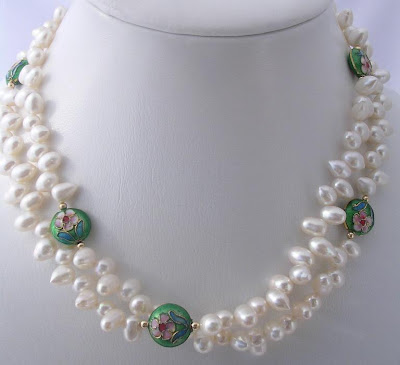 I have always loved pearls - those amazing, glowing orbs that throw a very flattering light onto your face, no matter what your colouring.

One of my earliest memories is digging in my mother's jewellery box where she had a long strand of pearls, plain pearl earrings and a ring that included rubies, sapphires, emeralds and a large pearl. When I started to work in the jewellery trade I still felt a heady attraction to pearls. I was ecstatic to find huge, gorgeous mabe pearls and the weird and wonderful shapes of baroque pearls.

At that time (25 years ago .... eeek!) freshwater pearls were tiny, shrivelled things that although they had a nice sheen were so far from the accepted cultured pearl that I paid scant attention to them. But my, how things have changed!

I now only use freshwater pearls in my designs. Plump and pretty, they range in size and shape and colour so that there is always something for everyone in a pearl!

History: Considered magic charms, symbols of purity and love, or sources of wisdom and power, pearls are one of the oldest known gems in the world having been worn in civilized Middle East and Asian societies as early as 3500 BC. India`s Hindu god Krishna was credited with discovering pearls when he took one from the sea and presents it to his daughter Pandaïa on her wedding day. Medieval knights wore them for protection in battle. The Greeks associated the pearl with love and marriage. Ancient Romans saw pearls as the ultimate symbol of power and wealth - a pearl earring reportedly paid for one Roman general`s political campaign!

How do pearls form: Pearls are formed in clams, oysters and mussels by the secretion of a substance known as nacre around an irritant in the outer tissue of the organism, or between the outer tissue and the shell. Only a few species are capable of producing pearls and can secrete the nacreous coating that has the attractive pearly luster of gem pearl. Nacre is also the substance that coats the inner surface of their shells (called mother-of-pearl). In most species, nacre forms at a slow 0.6mm of a mm a year.

Shapes: This depends on the shape of the irritant 'nucleus' around which the nacre is deposited and whether or not the pearl has moved during its growth.

Natural pearls: Forming by the chance entering of an irritant into the oyster, a natural pearl only forms in about 1 of 40 pearl producing oysters. Due to the slow rate of growth and the relatively short lifespan of the oyster, large sized natural pearls are rare and usually not round. Found in the Persian Gulf (considered the finest natural pearls in the world), the Gulf of Manaar, the Red Sea, the north and northwest coast of Australia, Burma, Tahiti, New Guinea, Borneo, and Venezuela.

Cultured pearls: These pearls grow around a nucleus that has been manually placed within an oyster. This practice dates back to the 13th century Chinese, but was only perfected in the early part of the 20th century by the Japanese.

Before the modern culturing techniques, a round nucleus, usually composed of clam or oyster shell, was placed between the the mantle and shell of the oyster and allowed to grow for 2 or 3 years. In modern cultured pearls the nucleus (a bead composed of freshwater clam shell wrapped with a strip of the mollusc's mantle) is placed within the mantle or gonad of the oyster, away from the shell, allowing it to grow freely.

The size of resulting pearls depend on the size of the nucleus, the mollusc species, the temperature and chemistry of the water, and the time allowed for growth. Several pearls may be grown in a single oyster, but these will be smaller than if a single nucleus is inserted. Growth periods are from 2 to 7 years and figures suggest only 25% produce a cultured pearl. Japan and Australia are significant producers of cultured pearls. Australia uses an indigineous oyster that produces typically large sized white or silvery pearls.

Cultured black pearls are found in oysters off Peru, Baja California, Panama, certain islands of Indonesia, Micronesia, the Philippines, Okinawa, and French Polynesia (Tahiti and adjacent islands). Only from the latter have cultured black pearls been produced in large numbers. These pearls are large and have a high growth rate as well as superior lustre.


Freshwater pearls: The process of natural freshwater pearls occurring is pretty much the same as other pearls, except one occurs in mussels (freshwater) and the other in oysters (saltwater) respectively. Cultured freshwater pearls are created by either 1) inserting a small piece of live mantle tissue (from another mussel) directly into the pearl producing mussel. These are composed entirely of nacre, just like their natural counterparts. 2) inserting a shape into the mussel in a like manner to the creation of cultured pearls to create "coin" and other shaped pearls. A mussel can grow up to 60 pearls at a time!


Blister pearls: When the oyster or mussel was coating the pearl it also coated the shell lining, resulting in a pearl that was attached to the shell.

Keshi pearls: These are formed when an oyster or mussel rejects and spits out the nucleus implanted during the process of producing cultured pearls. Because the nucleus has been expelled by the oyster, the resulting pearl is all nacre and they often have a wonderful lustre. Also known as Petal Pearls.

Colour of pearls: Natural colours vary from creamy white to yellow, pink, green, lavender, and grey to black. Colours are caused by the amount of conchiolin and aragonite present in the nacre and by the quality of the water in which the oyster or mussel lives. The freshwater pearls' natural colors include white, cream, lavender, pink, orange, gold and gray. White pearls are often bleached to remove any undesirable faint colours. Freshwater pearls are frequently treated (either by irradiation or dyeing) to create a veritable rainbow of colours.

Well. You should have a fairly good knowledge of pearls now :)

Since I've been talking pearls, pearls, pearls, I thought I would feature (surprise) a pearl necklace LOL. This is a long strand necklace (39.5 inches) that is pictured above wrapped twice around the neck. The pearls are freshwater with a stunning lustre. You are probably aware of exactly how hard I am when selecting my stones for use, and I went through A LOT of pearl strands picking only the best ones here. So that it wasn't just another 'ordinary' strand of pearls (knowing what you now know, I don't want to ever hear you call pearls 'ordinary' again!!) I added some springlike cloisonne flat discs every so often to give it some additional lift. In honour of the cloisonne I named the piece "Eostre" after the Anglo-Saxon spring goddess. I found a great write-up about Eostre here too that you might find interesting.

Till next time - have a great day!
Posted by Annette Piper at 09:13

Pearls!!! my favourite. Thanks for dropping by our blog.

I love the picture of your pearl necklace... I love that you've added the extra pieces. What a great Goddess for the name of the necklace.